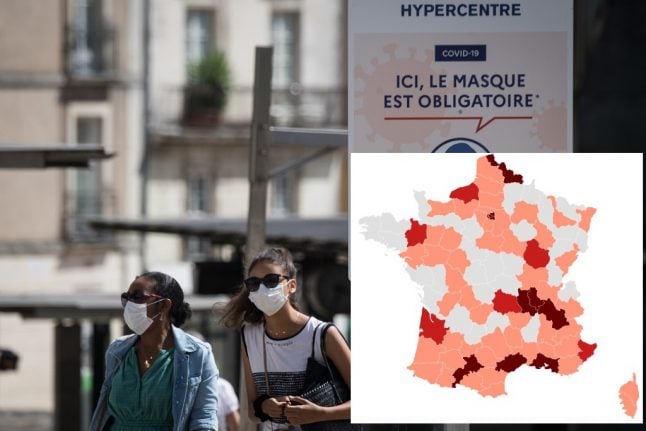 As Covid-19 infection rates continue to soar in France and hospitals are coming under pressure, the government is determined to avoid another nationwide lockdown.

Instead it has decided on a localised 'alert' system that imposes strict restrictions on areas with the highest number of cases. Separate to the alert system, but linked to areas with high numbers of cases, are local curfews (see below).

Here's how the system works.

*Note that for both the heightened and maximum alert status are related to cities and surrounding area (metropoles) rather than the whole département (see more below).

Colours – there are four stages to the system, coloured pink, red, dark red and dark grey on the Health Ministry's map.

Those areas coloured light grey on the map are where there is no alert in place.

Alert – there are 72 départements concerned by this, coloured pink on the map.

Local authorities in these areas can take extra “pertinent” measures to curb the spread, but they are not obligated to do so.

However all these areas must limit weddings, parties and social events to 30 people maximum.

Local authorities must take a string of toughened measures in these areas.

These include: closing bars at 10pm at the latest, limiting the number of people allowed to gather in public spaces to 10 maximum, lower the threshold for big events from 5,000 to 1,000 and ban all large parties such as student parties.

Restaurants are for the time being not affected by the early closing rule.

Gyms and sports halls will also close in most cases, along with community halls. Visits to Ehpad nursing homes will only be possible with appointments.

Maximum alert – In the first round of health briefings only two areas received this designation, the overseas département of Guadeloupe and Aix-Marseille – the southern port city and its surrounding areas. The initial designation is for 15 days, but local authorities have announced that Marseille's alert level has been extended until October 27th.

But on October 4th Paris and the petite couronne – the surrounding départements of Seine-Saint-Denis, Val-de-Marne and Hauts-de-Seine – were also moved up to maximum alert.

The highest level of alert means local authorities must close all bars for at least two weeks, although the period could be prolonged if the health situation required. Initially restaurants were included in the closure, but the government later announced a compromise that some could stay open under strict health conditions.

It's important to note that for both the heightened and maximum alert status are related to cities and surrounding area (metropoles) rather than the whole département.

EXPLAINED: What is a French metropole

Curfew – In addition to the restrictions brought about by the alert system is the curfew. As of Friday, October 23rd, 54 of France's 96 mainland départements are covered by a 9pm to 6am curfew. During those times everyone must stay at home unless they have an essential reason for being out, and any trip outside requires a permission form. Police are patrolling and breaking curfew means a €135 fine or €3,750 for repeat offenders. For full details on the curfew and which areas it covers – click here.