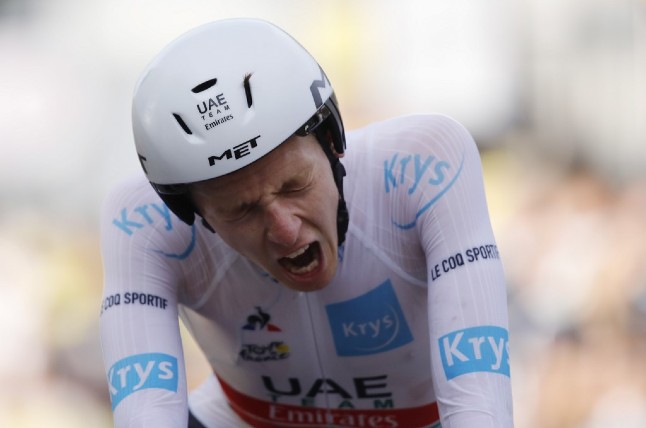 Team UAE Emirates rider Slovenia's Tadej Pogacar wearing the best young's white jersey crosses the finish. Photo: Christophe Ena / AFP / POOL
After 3,400km of intense racing, stage 21 starts with a parade for the winners of the various categories before a pulsating finale of eight laps around the iconic Champs Elysees in Paris.
The task of leading the peloton into the French capital in his yellow jersey will fall on the shoulders of the 21-year-old Slovenian Tadej Pogacar. His 22nd birthday, which falls on Monday, may be a bit special.
The youngest post-war winner is entitled to be as shocked as anyone after producing a remarkable turnaround on Saturday to snatch the title from the seemingly unshakeable grasp of his countryman Primoz Roglic.
Roglic will never forget the stage 20 individual time-trial which provided the kind of painful choke that haunts sportsman of all kinds well into their dotage. Aged 30, he is still some way away but this was perhaps his one and only tilt at the title.
Due to coronavirus restrictions only 5,000 fans will witness the awards ceremony in front of the Arc de Triomphe as the curtain falls on a race that very nearly never happened.
French President Emmanuel Macron is credited with giving the event the green light for a rescheduled event heavy in virus protocols to go ahead.
Race director Christian Prudhomme was left with a red face when he was sent home mid-race when he tested positive after the first week.
Worse, Prudhomme had shared a car with Prime Minister Jean Castex two days previously and both were put on a seven-day quarantine.
“We'll make it to Paris,” Prudhomme told AFP on his return. “Life must go on”.
Generational shift
Dutch team Jumbo-Visma dominated the 2020 race with their yellow and black jerseys always grouped at the head of the race as they outpowered everyone until the last and crucial day.
But in the greatest turnaround in a generation their captain Roglic chose the wrong moment to let his nerves get the better of him, dropping to second on the last day of real racing. Winners of the past five editions, Britain's Team Ineos also had a Tour they may regret.
After leaving out Chris Froome and Geraint Thomas, who have five Tour wins between them, Ineos were bedevilled by problems as they mourned the recent death of their long-time sports director Nicholas Portal.
They put their faith in defending champion, Egan Bernal, but in spite of spending a week in the white jersey, he struggled to impose himself, lacking perhaps the wisdom and experience of Thomas or Froome. He lost over seven minutes on stage 15 and dropped out the following day.
Team principal and expansive thinker Dave Brailsford refocussed the team, resulting in a stage win for Michael Kwiatkowski in the Alps but Ineos will be licking wounds as they leave France.
When it came to climbers though there was no touching Pogacar who takes the polka dot jersey as well.
There was a sudden focus on Slovenia, a nation of just two million, as Roglic and Pogacar contested the overall win.
“There are great professionals in Slovenia in all kinds of sports, it's a tough nation and we are all pushing each other,” Roglic, 30, told reporters last week.
Ireland in the green
Ireland's Sam Bennett edged seven-time champion Peter Sagan for the sprint points classification after a long struggle that went down to the finish line.
When Bennett first took the lead he was presented with the green jersey by the mayor of Lyon, Green party politician Gregory Doucet.
Doucet was critical of the Tour, calling it macho and outdated, with the organisers hitting back.
But the Tour, that adapted so well to the illness oubtreak, looks likely to have to adapt to the increasing presence of green politics on the municipal level of the major urban centres which it passes through,
Paris Mayor Anne Hidalgo is one of the instigators of lending gender parity to the podium prize presenters.
The flowers and jerseys at the Arc de Triomphe are to be handed out by a man and a woman, and there is now more lipstick on the collars with the traditional kiss on the cheek also gone.