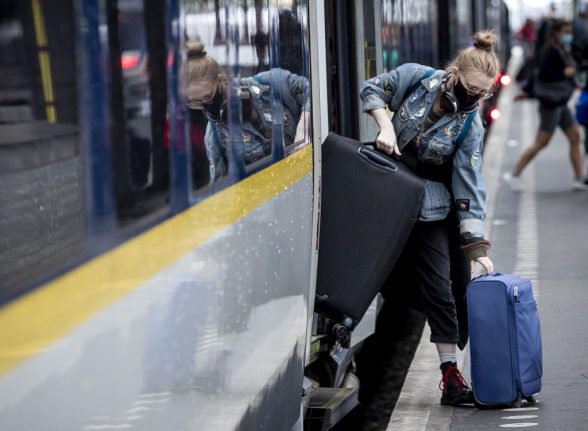 A passenger carries her luggage as she gets off a Eurostar train. Photo: AFP

After months of lockdown, on July 1st the EU reopened its borders to non-essential travellers from 14 countries. The United States, however, was excluded from the “safe list”, leaving Americans to cancel their summer travel plans to France.

Since then nothing has changed with the border between US and France effectively closes with only certain people allowed to enter including those on student visas, permanent residents or those travelling for “imperative family reasons”.

But some Americans have managed to avoid the rules and travelled to France without having to obey its travel restrictions.

Alexander, 44, a lawyer who lives in New York, had been trying to get to Paris to be with his French partner, whom he hadn’t seen since March.

Despite promises from France's Secretary of State in charge of tourism, there still isn’t a clear procedure in place that allows couples where one person resides in France and the other in a non-EU country, to reunite on French territory.

After several attempts to obtain what is called a “laissez passer” travel pass that would allow him to travel directly to France, Alexander started reading posts on social media of people who had managed to get to France via the UK.

Unlike the countries in the Schengen area, the UK does not have restrictions for travellers from the US. Visitors from America can still enter the country so long as they agree to self-isolate for two weeks.

But the quarantine does not apply to those only passing through the UK to get to another country, including those in Europe that have imposed a travel ban on travellers from the US. Travellers are permitted to go straight between ports (such as from the airport to Eurostar) without self-isolating. All they have to do is fill out a Public Health Passenger Locator Form.

“We decided this is it,” Alexander told The Local.

“We were intending to spend a lot of time together in August, and then we were supposed to spend the entire month in September in New York. So when I saw people were doing it I just booked a ticket to London.”

To be safe, Alexander put together a few documents including a copy of his partner’s passport and a letter from him stating that he would be able to quarantine at his home in Paris.

From August 15th, arrivals to the UK from France must go into a 14-day quarantine, or risk a £1,000 (€1,105) fine. Travellers must provide their contact details and may be subject to checks.

The French government threatened to retaliate, but still hasn’t announced new rules for those arriving from the UK.

When France imposed a quarantine on travellers from UK during the first wave of infections in the spring, this was only advisory and there were no sanctions in place for those who broke the rules.

In July France had further tightened its entry rules for travellers from the US by requiring they take a Covid-19 test before they make their journey. As of August 5th, all travellers from the US, including French residents and French citizens, must present a negative result from a Covid-10 test taken within the previous 72 hours in order to be allowed onto the plane.

Getting a test in the US can be very difficult due to long waiting times and delayed results, but Alexander managed to get a test result within 72 by paying $130 for a test at a lab facilitated by the French consulate in New York.

The UK, however, does not require a negative Covid test before you board the plane.

“I did the test because I didn’t want to be in a position where I’m putting anyone in danger,” Alexander said. “But nobody asked me for it.”

Alexander boarded the plane at JFK airport, and was told by the flight crew that he would have to fill out an online Passenger Locator Form, where he had to set up an account, provide details relating to his trip and indicate whether he was either in transit or staying in the UK.

Despite not having to prove his reasons for travel or provide much documentation, Alexander said he was still very worried that something would go wrong along the way.

“I really was terrified,” he said.

“First I thought they weren’t going to let me into the UK, and then I didn’t think they would let me onto the Eurostar. But none of it happened.”

He is planning on taking the same route in reverse to return to New York.

Though he said he understands that people should adhere to travel restrictions put in place to stop the spread of infection, he argued that reuniting couples who are not married should be considered essential travel.

Alexander said he feels lucky because not everyone who is separated from loved ones is able to make the journey, particularly those in countries where you require a visa.

Ultimately, he said, what pushed him to make the journey was the French government’s slowness in providing the travel pass, the first of which are expected to be issued this week.

“We were separated for 165 days. This is not because I wanted to go on holiday to Corsica, it’s because I hadn’t seen my partner in a really long time. And it has a psychological impact, not just on me but also my partner who is a French citizen.”

Alexander is far from the only American who has travelled to France and other European countries via the UK.

Several Franco-American couples have been sharing how they managed to make it to France via the UK on Facebook groups for couples who are trying to reunite with their loved ones in France.

Posts detail all the documents and precautions Americans should take when travelling.

Those sharing their experiences or asking for advice generally make sure they have a negative Covid-19 test before they travel, as well as any other documents that could help them prove they have a good reason to board a plane. But many say they made it to France without having to use them.

Aside from France, Americans have also been using the UK route to get to other countries like Spain and Italy, which have also excluded the US from their safe lists.

But not all those who made it advise others to take the same risk.

One US traveler told The Local described his journey to Italy via the UK as a “costly gamble”.

“I thought everything was okay until I reached Rome. Travelers from the UK are required to go through Italian passport control, and the officer stopped me from entering.  They escorted me to a backroom where I spent the next hour being asked for various documents including my Italian marriage certification.”

“Getting to Italy now is a huge costly gamble even with all the correct forms and documents,” he said, adding that “the underlying problem is the lack of organization.”

Please note The Local is not able to advise on specific cases – please contact your embassy for official guidance.