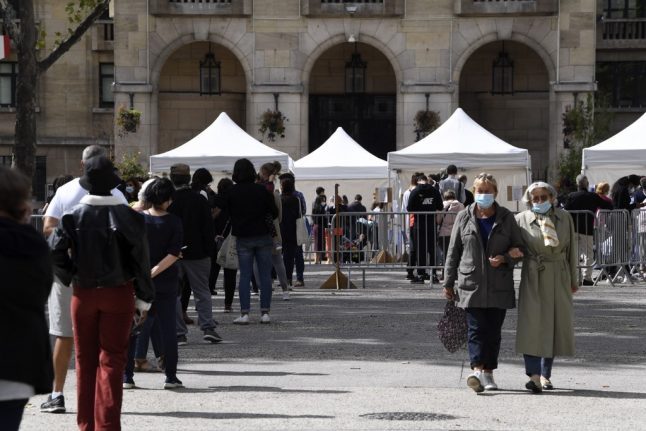 People queue for a Covid-19 at a testing booth in Montreuil, near Paris, on August 31st. Photo: AFP

“You’re questioning our strategy,” Véran said during the first of what will become a weekly press conference by the health minister on the Covid-19 situation in the country.

“We made the choice in France to allow every French person who wishes it and whatever the reason, to benefit from a free test without a prescription,” the health minister said.

The health minister defended the government's strategy, saying testing broadly permitted them to detect also asymptomatic cases and trace and break up transmission chains, but said the government had decided to tighten the rules to “ensure that priority groups get priority.”

What is the current strategy?

Testing was made a cornerstone in the French government's strategy to avoid that the virus spiral out of control as life returned to normal after the strict, nationwide lockdown imposed this spring.

The goal was that anyone in France should be able to get tested for free, no medical prescription needed. To achieve this goal the government massively ramped up the national Covid-19 testing programme. Since beginning to ease the lockdown mid May, few months the country increased the number of weekly PCR-tests (Q-tip tests) from around 200,000 to over 1 million per week. Anyone can get tested for free in France. Photo: AFP

But increasing the number of tests did not solve all problems, as labs have become overwhelmed with demand.

“Nonetheless, a direct consequence of this large-scale testing is traffic jam,” he said, referring to the long queues outside labs across the country.

Some have reported not only waiting in line for hours, but also receiving the results days or even weeks later.

Is this a record? Just got my Covid-19 test result back after…. 11 days. Test site was Town Hall in 10th arrondissement, Paris. From what I've heard people who go to the “labos” get results back pretty quickly – 48 hours. These “pop-up” test sites are not the most efficient….

To ensure that vulnerable groups get tested in time, the government is shifting its strategy towards targeting certain groups, the health minister said.

The details remain unclear and we will know more details in the coming days, but the health minister announced a shift from a free-for-all testing strategy to one where some groups get priority above others.

Instead of just showing up to a lab to queue, the French will have to reserve their time slot, the health minister said.

That will give labs leeway to prioritise serious cases above less serious ones. Parisians queue up outside a free testing booth set up in front of the Hotel de Ville in Paris, on September 7th. Photo: AFP

Who will get priority?

This is where things become unclear. The health minister listed “people who have a medical prescription, symptomatic people, nurses, caregivers and contact cases,” but we don't know for example the category “symptomatic people” will be determined.

The health minister said the prioritisation scheme was work in progress, so we should get more details about exactly how this will work in practice soon.

He also said big cities would get additional screening centres to ease the pressure on labs.

Paris' greater region Ile-de-France will get 20 new testing centres on Monday where priority groups can tested, he said.

When should you get tested?

Only people who have been in contact with infected individuals, those showing symptoms or with a doctor's prescription should seek tests, the health minister said, to avoid a deluge of requests at labs already struggling to keep up.

“There is no point in getting tested too often. The test is not a health measure,” Véran said, referring to the governments official Covid-19 precautions on rigorous handwashing, wearing of face-masks and maintaining social distancing.

“[A test] must be done if you have any doubts or if you have been confirmed as a contact case,” he said.

A person is a contact case if they had spent time with a Covid-19 positive case and were alerted either by that person or by regional health authorities, the health minister said.

Anyone further out in the contact chain did not need to get tested, according to the health minister.

He said the health ministry had ordered five million antigen test kits, which can give preliminary readings on Covid-19 contagion in just 30 minutes, for delivery in early October.

Regulatory approval for saliva tests is expected “imminently”, he said.

France has reported nearly 10,000 new cases per day over the past week, a steep rise from numbers over the summer.