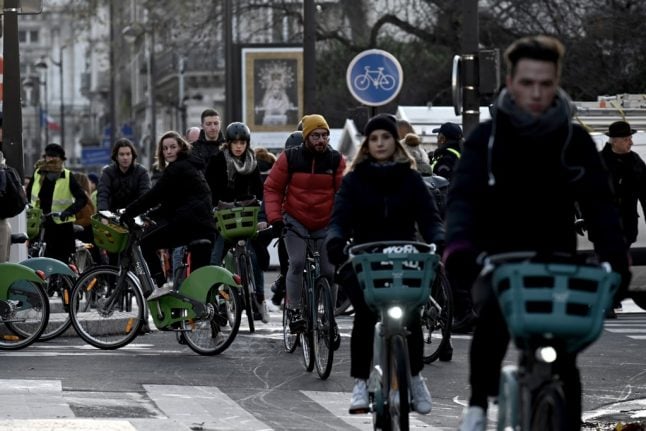 When the lockdown ended in May, the city of Paris created 50km of so-called coronapistes (coronavirus cycle lanes) to provide a safe alternative to public transport and get Parisians moving again.

Some 100km were created in the surrounding suburbs.

Rue de Rivoli, he avenue that runs through the city from east to west, connecting Place de la Bastille with Place de la Concorde, was once one of the city’s most traffic-ridden thoroughfares.

For months, it has been completely reserved for pedestrians, cyclists and only a few authorised vehicles. On Wednesday September 16th, Paris Mayor Anne Hidalgo said Parisians would get to keep the temporary lanes.

“There will be no more private vehicles on the Rue de Rivoli,” she told radio station Europe 1.

This is now Paris’ reality ??

The lanes feature in Hidalgo's broader strategy of turning Paris into a top capital for cyclists and convert more Parisians to choose the bicycle over more polluting means of transport for their commute.

So far, her strategy has proved a success. According to the city council, the number of cyclists in Paris has skyrocketed since France emerged from lockdown, increasing by more than 50 percent.

So does that mean that the city has now reached its goal of becoming a bicycle capital, on par with Berlin, Amsterdam or Copenhagen?

“There is definitely some progress,” said Léa, 25, who was parking her bicycle near the Bassin de la Villette in the 19th arrondissement.

She praised the City for its willingness to boost schemes like Vélib, the Paris public bike share system, and initiate people to buy their own bike.

“But compared to cities like Berlin, cycling in Paris is still not as safe,” she told The Local.

“I have seen what a real cycling city looks like. We are not there yet but I think people want that and it’s happening.”

Since 2015, Paris has invested 150 million euros as part of a goal to become a “world cycling capital”.

The five-year plan included doubling Paris cycle lanes from 700 to 1,400 km, creating 10,000 bike parking spots and upgrading the Velib' system, which had been falling into disrepair.

Paris rises in the rankings

The investment in better cycle lanes has earned Paris praise from cycling specialists.

In the Copenhagenize index which ranks bicycle friendly cities around Europe, placed Paris in 8th place in its latest index – a rise of 5 places.

“After years of relying on bus+bike lanes to make up a significant part of their network, Paris is finally getting into gear and building out dedicated cycle tracks – including protected facilities on the Champs-Elysées,” the index said.

It praised Paris for standing up to local politicians who were infuriated by mayor Anne Hidalgo handing over key roads such as the Rive Droite, from cars to pedestrians and cyclists.

But more will have to be invested for Paris to be really transformed.

The Copenhagenize index spells out what Paris can do:

“Although new infrastructure is finally seeing the light of day, more attention needs to be paid to the details of the facilities – how they connect at intersections, and how they cater to users of all ages and abilities.

“And enough with the confusing bidirectional cycle tracks.

“Additional funding should be put towards clear communications of the benefits of cycling for Parisians, supported by a strong brand identity for this amazing city.

“This goes hand in hand with helping to educate street users of all types on how to use and approach these new cycling facilities.” A city of bicycle newbies

Unlike the inhabitants of other European cities with a strong bicycle culture, the majority of cyclists in Paris are relatively new to it, which means having to be extra careful.

Around Jaurès metro station, where the Avenue Jean-Jaurès meets Rue de la Fayette and Avenue Secrétan, commuters on bicycles, motorbikes, cars and trotinettes navigate the busy intersection, where bicycle lanes blend into zebra crossings and at at one point move onto the pavement.

“Cycle lanes need to be safer and wider. And there needs to be more respect between people on the road. It’s a bit crazy at the moment. People on bicycles are much more vulnerable, so there it’s about respecting others,” said Léa.

While Paris has adapted its streets to bikes it's sometimes been at the expense of safety.

Paris' dense city centre still nonetheless poses problems for cyclists, with some bike lanes running against traffic along narrow, cobbled streets and others hastily painted on pavements where pedestrians are used to walking.

City authorities have been experimenting by painting some lanes green to better alert pedestrians. However the results have been mitigating with reports that lanes become slippy in the rain and that the green pain all but disappears after a short time.

Hopefully the town hall will find a solution.

Authorities in Paris could also take tougher action to prevent scooters, cars and delivery trucks from parking their vehicles in cycle lanes, which forcers riders out into the traffic.

All of the people interviewed by the Local agreed that while Paris was taking the right steps to make cycling the preferred mode of transport, there is still a lot left to do before the city can call itself a “world cycle capital”.

Has Paris now become a real cycling city? Tell us your views, what more needs to be done for Paris to become like Berlin or Copenhagen?

“We are still far from being like Amsterdam,” says Tarik, 50. “There are some streets in Paris where it’s still quite dangerous because the cycle lanes are not wide enough. But I think things are going in the right direction.”

With so many people on bikes it can now be hard for cyclists to find a place to safely lock their wheels, given the lack of proper parking stands.

Which brings us to another major problem for cyclists in Paris: theft.

As cycling gains popularity, the number of reported bicycle thefts has soared, something that remains one of the main drawbacks for Parisians considering buying a bike..
Some 400,000 bicycles are stolen in France every year. And in Paris alone, at least 5,000 bicycles have been stolen in the past eight months, according to the Paris police prefecture. That’s a 62% rise in thefts compared to last year.
The Paris town hall is building secure parking spaces, particularly near train stations and park & ride facilities. But there are currently only 40,000 of these across the city, while the number of bicycles continues to rise.
France’s national rail company SNCF has also been asked to create secure bike parks around its stations.
The town hall website also gives advice on how not to get your bicycle stolen: getting a sturdy bike lock and getting an insurance are among its recommendations.
But the part of the “Plan Vélo” unveiled by the government in 2018, all bicycles purchased after January 1st 2021 will have to be tagged and registered on a national database and owners will be given a “certificate of ownership”.More Parisians on bikes

More than 15,000 riders took out an annual subscription for Velib' in the first week of May. And earlier this month, it surpassed 400.000 members. “We are aiming for 1 million members in the next 5 years,” Stéphane Volant, the president of the company that operates Vélib told Le Parisien.

Paris is really turning into a cycling city these years
Vid @CommuteDeParis pic.twitter.com/rZileatNV0

Jean-Pierre, 68, was struggling to get a bicycle from a Vélib station at Jaures, which in the area is notorious for being either empty or filled with broken bicycles.

“Paris cycling capital is still a bit of a premature goal,” he said.

“For example, none of the bicycles at this station work, and the majority of Vélib stations are in this state. The bike sharing system still isn’t working well enough.”

Bicycle sales are also booming, thanks to a 500€ subsidy towards buying an electric bike, paid by the regional Île-de-France government. When it was implemented last year, it resulted in long waiting lists as bicycle shops struggled to keep up with demand.

The Local contacted a few bicycle shops for this piece, but they were all swamped and could not reply to our questions on time.

“After the lockdown the number of cyclists exploded, so it’s just a case of adapting to the change, people need to be more careful,” said Parisian cyclist Benjamin, 25.

“Because not following the rules to a T is not a huge problem, you just have to be aware of others.”

“People’s mentality needs to change. But that takes time, so I think things are going in the right direction,” he said.