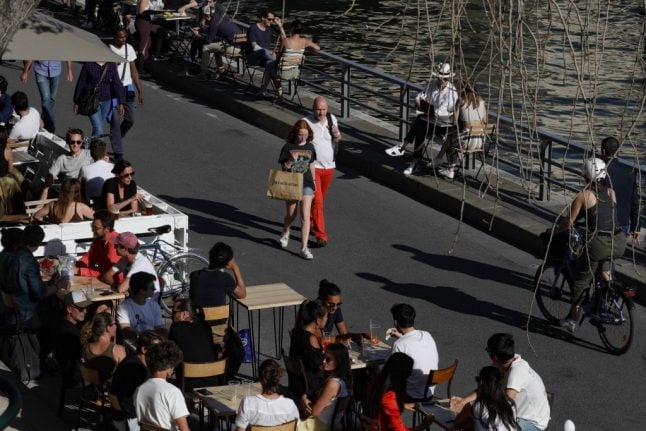 Local authorities in Paris have not yet imposed tougher rules to limit spread in the area. Photo: AFP

Local authorities in Paris warned that since the beginning of September the spread of Covid-19 infections had intensified across the region of Ile-de-France, “especially in Paris.”

In a press release, health authorities and the regional prefecture asked Parisians to strictly keep with health rules to help slow down the spread, which they said was “impacting regional health services.”

“In the last three weeks the number of visits to emergency units for Covid has increased by 88 percent,” they wrote.

“A significant number of epidemic clusters originate within the family or groups of friends,” they said.

“It is therefore up to everyone to protect their loved ones by reconsidering organising private gatherings, when they include more than 10 participants.”

“It's the absence of respect of health measures and people mixing together that's making the situation more favourable for the virus.”

In Nice on the French Riviera where hospitals also worry about the rapidly rising number of new patients, local authorities announced a string of new rules to limit socialising in the city.

They banned public gatherings of more than 10 people in all parks, gardens and beaches and lowered the maximum number of participants in big events from 5,000 to 1,000.

Bars must close from 00.30am to 6am and all alcohol consumption in public was banned after 8pm, Bernard Gonzalez, head of the Alpes-Maritimes département said.

France's health minister Olivier Véran on Thursday evening asked local authorities in charge of the départements around Nice (Alpes-Maritimes) and Lyon (Rhône) to “take steps” to halt the spiralling Covid-19 rates in the two cities.

Unless swift action was taken, Véran said Lyon and Nice soon could find themselves in the same precarious situation as the southern port-city Marseille, where hospitals for the first time since the first wave of infections hit France this week reported that their intensive care units were filling up.

Lyon is expected to announce measures similar to those in Nice on Friday.

For the time being, local authorities said the new and tougher rules only would apply in Nice, but that they could be extended to the whole Alpes-Maritimes departement if the health situation deteriorated.

Nice Mayor Christian Estrosi also said the city would set up time slots for elderly over 65 to use public services, and temporarily suspended visits to all public elderly nursing homes (Ehpad) in the city.