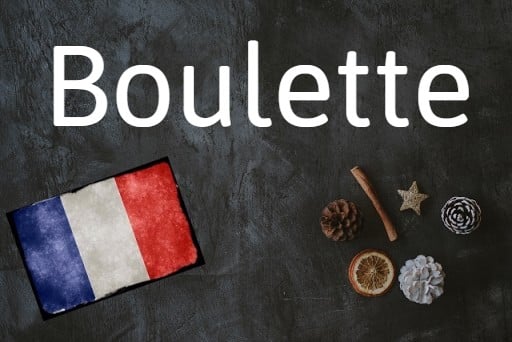 Why do I need to know boulette?

Not only is it a word you will hear in France, it's also the title of a very popular rap song that a lot of French people will make references too.

The most common way of using boulette is boulettes de viande, which means meatballs.

But it does have a few other meanings in French, and when ordering spaghetti with meatballs, you will have to ask for des spaghettis aux boulettes de viande, so you actually need to specify that it's balls of meat you're looking for.

Though if you hear j’ai fait une boulette, it has nothing to do with meatballs or any other balls for that matter.

In this sense, une boulette means 'a blunder', 'a mistake' or 'a gaffe'.

If you are the one who’s made the mistake, someone might comment oh, la boulette !, meaning ‘what an idiot!'

Boulette can also be a derogatory insult directed at someone's physical appearance.

Quelle boulette – What a fatty.

This is obviously an insult and we don't suggest you use the expression like this, but it's key to understand the French star rapper Diam’s hit song La Boulette, which according to the rapper herself, “the boulette, it’s me! Is there a problem with that? I love to eat, screw you,’ she said.