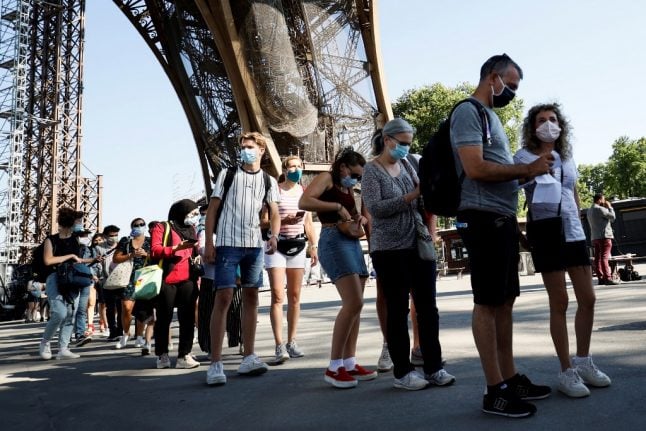 Paris has seen its tourism business shattered by the pandemic. Photo: AFP

France's tourism industry has suffered big losses since Covid-19 saw countries step up travel restrictions in March to stem the spread of the pandemic across their territories.

“Over the whole summer, we ran two tours whereas in a normal summer we would quite often be doing two a day,” Heidi Evans, a tour guide in Paris told The Local.

Tour guides like Heidi have struggled to cope since the beginning of the pandemic. Her Women of Paris Walks draw English-speaking customers, most of whom have been hindered from coming to Paris because of the pandemic.

“For the most part, my bests clients are American, British and some European… These people were obviously not travelling this year,” Heidi said.

With the United States featuring on the EU's risk list and Americans banned from entering France unless they provide a negative Covid-19 test, France – and especially Paris – lost a big chunk of its usual tourists this year.

The capital lost 14 million tourists the first six months of the year, according to Valerie Pécresse, the president of the greater Paris region Ile-de-France.

READ ALSO: How Paris tourism has been 'shattered' by the pandemic Paris has lost millions of tourists since the pandemic. Photo: AFP

But even in regions that a surge in visitors thanks to French staycationers, tour guides did not get their part of the share.

“Personally, I used to work with 90 percent of foreigners, Americans, Australians, New Zealanders..,” said Chloé Savart, a tour guide in Giverny, a favourite spot for both international and French tourists and in the Normandy region, northwest in France.

“I tried to work more locally, but local and even national tourism does not compensate for the losses,” she told The Local.

“I have not even reached five percent of my annual turnover in terms of profits.”

Chloé found herself in dire straits, especially seeing as her partner also is a tour guide in the company that they created together, Normandy Experience.

She got a job at a restaurant where she worked two months. Now she works as a stand-in English teacher at a university in the region.

In Paris, Heidi tried to compensate for the losses by working as an English teacher.

“I have always picked up a bit more online English teaching during the winter months when it’s a bit quieter, but normally I would not do that in the summer,” she said. A tour guide with a group in Paris. Photo: AFP

'Not enough' help from the government

According to the French Tourism Secretary of State, Jean-Baptiste Lemoyne, tourism generates €180 billion on average per year. Of these, €60 billion come from international tourism.

“The immediate impact of the pandemic is of at least, €30 to €40 billion,” Lemoyne told the Journal du Dimanche last August.

To help its reeling economy, France quickly ramped up economic schemes to help businesses cope with their losses caused by the strict, nationwide lockdown.

The government set up a “solidarity fund” to help small business owners and self-employed who suffered from the months of economic standstill, and later extended this fund to last all through 2020 for the restauration and tourism sectors, which where the ones the hardest hit by the pandemic.

But even with the government funding, both tour guides said they were having to adapt “big time.”

“The government funding is only OK when supplemented with the money that I get from teaching,” Heidi said.

She said the two income sources combined could last her until December.

“But the question is, what the hell do I do then?”

Chloé said the fund had been of “big help” to her and her partner, but that it did not compensate for their economic losses.

“It allows us to keep our heads above the water, but it barely covers the expenses of his [her partner's] business,” she said. Despite all of these obstacles, Chloé said she was not giving up on her future as a tour guide. The most difficult part of the situation was not being able to do what she loves the most.

“My job is my passion, so this is frustrating and tiring, mentally and morally,” she said.

For Parisian-based Heidi, the uncertainty is what makes the situation complicated to deal with.

“In order to sustain myself I am going to need to look for a proper job, but, if I do find work somewhere else, will I then be able to do tours if we have a return to normality next summer?,” she said.

In order to compensate with the loss of clients, both tour guides developed new ways of doing their jobs.

“We are still working on it but the idea is to turn one of the tours into a virtual experience,” said Heidi.

Several companies have already gone online, but the results are mixed, she said.

While online tours opened access to a worldwide market, Heidi said it was difficult to make them popular enough for people to want to spend their money on.

In Normandy, Chloé and her partner decided to work more on a local level and offered bike tours and food tours in the summer.

“We tried to work towards a more intimate, playful tourism but it was not well received because people were afraid of being in crowded place,” she said.

“We can’t blame them, seeing as no one knows where [the pandemic] is headed.”