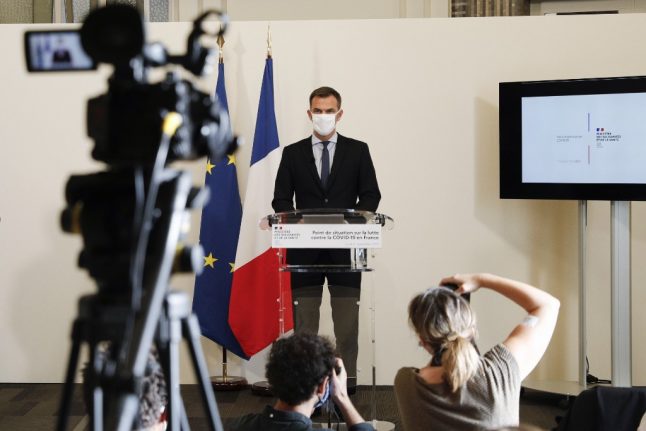 French Health Minister Olivier Véran on Thursday laid out the government's strategy to fight the spread of Covid-19 in a televised speech to the nation. Photo: AFP

Olivier Véran said the government had asked local authorities in Nice (Alpes-Maritimes) and Lyon (Rhône) to “take steps” to halt the spiralling Covid-19 rates in the two cities.

“For several weeks, we have seen the virus accelerate its circulation,” Véran said during the first of what was to be a weekly press conference by the health minister to update the country on the latest situation.

“The epidemic is once again very active in France,” he said.

The government last week asked the same of local authorities in Marseille and Bordeaux, where local authorities soon announced measures to restrict bar opening hours and limit the number of people allowed to gather in public.

Local authorities in charge of the départements around Nice and Lyon will announce similar measures “by Saturday,” the health minister said.

“If the situation doesn't improve (in Marseille).. even stricter measures will without doubt need to be taken,” Véran said.

READ ALSO: Where are Covid-19 rates rising in France?

Authorities in Marseille have been concerned about the rapidly rising hospital numbers, with hospitals this week reporting that their intensive care units were filling up. This is the first time this has happened in France since the first wave of infections in March and April.

Unless swift action was taken, Véran said Lyon and Nice soon could find themselves in the same precarious situation.

In both cities, Covid-19 had reached a level of spread above the government's set threshold of alert.

Lyon on Thursday had an infection rate of 200, meaning that the city over the past seven days had registered 200 new coronavirus cases per 100,000 inhabitants. Any area registering an infection rate of above 50 cases is considered an area of “elevated” concern  by health authorities.

Véran said authorities were especially worried about the incidence rate among the elderly in the two cities.

“Protecting the elderly and vulnerable remains a pillar in our strategy to fight the virus,” the health minister said.

“In Lille, Toulouse, Rennes and Paris, the (incidence number).. has passed the alert threshold,” Véran said.

However Véran said these areas were not seeing the same pressure on hospitals and level of spread among the elderly.

“We will be extremely attentive to the development in these cities,” he said, stressing that the situation could quickly deteriorate and that the government might have to ask local authorities in these areas as well to take similar measures to stem the spread.
READ ALSO: Why are Bordeaux and Marseille facing tougher Covid-19 restrictions but not Paris

Véran said local authorities had to strike a balance between acting “neither too early.. nor to late” when it came to taking extra measures to limit daily life.

If taken too early, the rules “would not necessarily be accepted by the French,” he said.

But taken them to late could have fatal consequences “due to the 15 days of delay of impact on hospitalisations.”

He asked French to be cautious and keep complying with health rules such as face-masks, rigorous handwashing and limit social gatherings.

“The figures no longer leave any doubt: Family gatherings, friendly, are massive sources of contamination,” he said.

“Each and every one one of us, plays a key role in the fight against the virus.”

“But we have to learn to live with the virus. We must preserve our social, economic, cultural and civic life. Every day, we are becoming more effective against Covid 19.”
The minister also encouraged parents to send their children to school even when they had a cold but no fever.
Classes would not be closed if there was just one infected case, but children would be forced to stay hole if there was a “chain of infection” in the class, he said.
He declared a shift in the country's testing strategy and said “priority groups would get priority.”

He added that there was “no point in getting tested too often.”

“The test is not a health measure, it must be done if you have any doubts or if you have been confirmed as a contact case,” he said.

A person was a contact case if they had spent time with a Covid-19 positive case and were alerted either by that person or by regional health authorities.

Anyone further out in the contact chain did not need to get tested, he said.