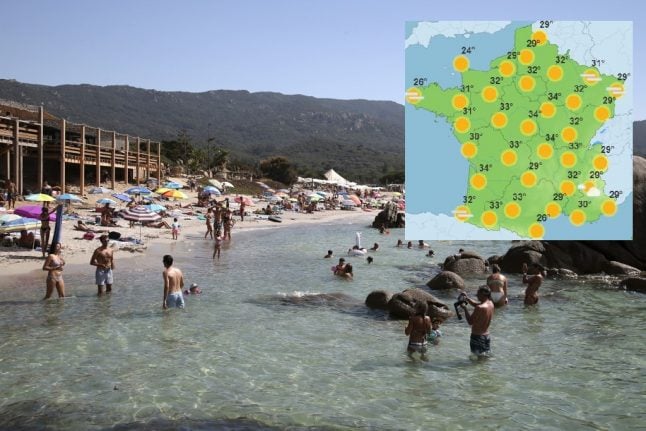 Monday will be the hottest of what is set to be a sunny and warm week, with unusually high temperatures for the season.

“Monday and Tuesday afternoons will be exceptionally hot for the season. To put it in context 34C to 36C is (depending on the location) 10 to 15 degrees above the average for mid-September,” wrote Météo France in a tweet.

Thermometers across the country were set to hit the 30C-mark on Monday, but the southwest of the country would see the highest temperatures with 37C forecast for Bordeaux and 36C for Poitiers.

But in general the weather will be hot and sunny all over the country on both Monday and Tuesday, with the mercury in Paris and Lyon set to rise to 35C on Monday.

That means the capital could break a record set back in 1947, when it saw its highest temperature ever recorded in mid-September of 33.2C.

Some climate specialists say this week's high temperatures are a sign of things to come and the French will have to get used to heatwaves in September.

“This type of heat spike in September is a perfect example of what could await us between now and 2050. Heatwaves will not only be more and more frequent, intense and long, but they should also be earlier and sometimes later,” climatologist Francois Vimeux told Le Parisien newspaper.

Nantes and Lyon could see temperatures of 34C on Monday, while Marseille will be slightly cooler with Météo France predicting 32C for the southern port-city.

From Tuesday, Météo France said temperatures would cool down in the west of the country, with downpours predicted in some areas, but the weather agency said the hot weather would remain “until the middle of the week across a big part of the east and northeast of the country.”

Thermometers will linger around the 30C-mark on Wednesday in most parts of the country, except for in the northwest, which will see cooler temperatures of 21C-23C in some areas.

For maps with details on the local temperatures predicted for each day, go to their website.

France has struggled with sweltering heat all summer, with several  heatwaves causing drought across the country.

Many areas still placed on the environment ministry's crisis list and could be subject to water restrictions (see map below). To find out what the restrictions are where you live, click here.