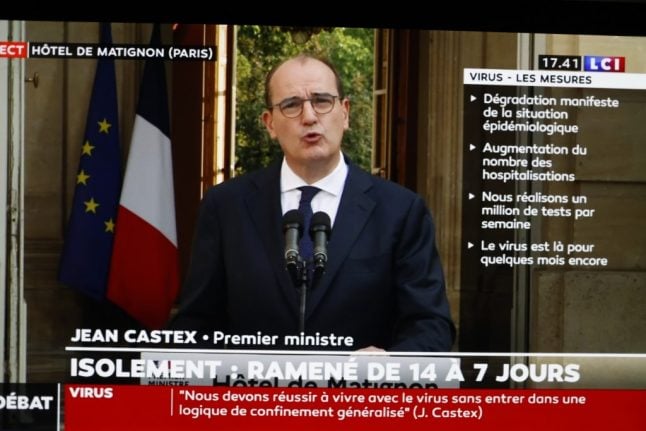 Reactions were swift after French Prime Minister Jean Castex' spoke for some 10 minutes after the government's defence council meeting on Friday, where the topic had been France's rapidly rising Covid-19 rates.

Castex did announce moves to alter the country's testing strategy, cut quarantine times, hire 2,000 new contact tracers and put pressure on authorities in Marseille and Bordeaux to come up with new measures by Monday.

But it was the lack of any major new restriction that caught the attention of most.

“Because the level of infections in France has reached an “alarming level,” Macron's PM boldly announces that the government will do nothing much,” tweeted writer and journalist Pierre Briançon.

Because the level of infections in France has reached an “alarming level,” Macron’s PM boldly announces that the gouvernement will do nothing much.

French President Emmanuel Macron had hinted the previous day that the government would announce new restrictions on Friday “adapted to regional conditions.”

Castex asked authorities in hotspots Bordeaux and Marseille to “present suggestions” to him “by Monday” to tackle the flaring rates in their areas, but did not announce any major moves to intervene to curb the spread.

Read about the speech in detail here.

“The second wave is clearly here. Whether it will be as violent as the first is still not clear.”

Rather flat announcement by PM Jean Castex with no tough new measures to control the rising covid numbers. Fair enough to allow local prefects to propose policies based on local conditions. But needed some sense of grip at national level which has been missing in recent days. 1/4

Lichfield said that after having been criticised in the spring for being “too centralised and monolithic in their response, it seems they now intend to leave each region or large city – the local prefect or government representative, not mayors or local politicians – take locally appropriate measures.”

“This may be the right approach. But the Castex announcement still needed to give a sense of grip at national level. That's been missing in recent days,” Lichfield said.

Jean-Paul Hamon president of France's Doctors Federation told BFM TV the speech was “a lot of noise for nothing”.

Hamon said there was nothing new and the PM effectively reminded people to wash their hands and wear a mask. The representative of doctors did however say the plan to prioritise testing for those with symptoms, people who had been exposed to infected individuals and health workers was important and the government had made a mistake by opening up testing to everyone because it had resulted in long delays to receive results.
“Several hours with the defence council and a solemn declaration to tell us to “respect health rules.” Let's meet again in three weeks with Macron who will tell us “the virus is counter-attacking, it's war.” What incompetence!” tweeted economics professor Thomas Porcher, summing up many reactions on Twitter.

But Daniel Camus, epidemiologist at the Pasteur Institute in Lille, said the government was right in remaining prudent and refraining from going back to sweeping, general decisions.

“I think it's good that they have chosen a solution where they don't take the same decisions everywhere. It shows that they have listened to the public opinion,” Camus told The Local.”

“It requires more work. It would be easier simply to say “France should do this or that”. But it's an approach that is better adapted to each area,” he said.

“Whatever decisions they take, there will always be those who want to criticise it.”

“We need to stay calm. The situation is serious, but, at present it is not an extremely serious situation,” he said.

“There are no right answers here. We don't know what the situation will be like in the future, there's no way of knowing.”