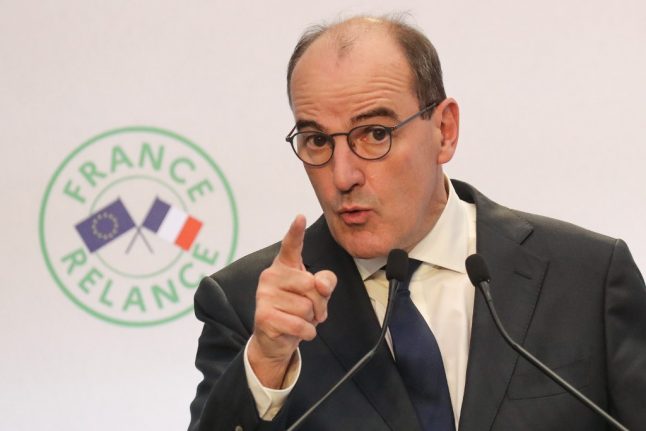 “The virus is circulating more and more in France,” the prime minister said at a press conference adding that the government's aim was to avoid a new national lockdown.

There is a “clear worsening” in France of the spread of Covid-19 which has “not lowered in intensity” and “will still be with us for some months,” Castex said in a televised statement in Paris.

“For the first time in several weeks we are noticing an increase in the number of hospitalisations.. And the patients in intensive care are still the same as in March,” he said.

But he did not announce any major new restrictions, saying France's aim is to “avoid a general lockdown” and succeed in living with the virus through social distancing, mask-wearing and ramped-up testing.

Castex spoke after French health authorities had reported a record-high surge in infections of nearly 10,000 new cases in 24 hours on Thursday.

“Our strategy doesn't change. Fighting the virus without pausing our social life, cultural life, the economy, the education of our children and our capacity to live normally,” Castex said.

Yes, the virus is still there and it will remain here for a few months still, and we need to manage living with it without imposing a generalised confinement.”

The French PM said the simplest way to fight a second wave of Covid-19 lay with members of the public respecting basic guidelines.

“The simplest and least constraining solution, we know what that is: it's scrupulously respecting hygiene rules, and this is mostly up to us,” he said adding that it was imperative to respect physical distancing and face mask rules.

Castex did announce that the period of isolation required for those who test positive would be reduced to seven days from 14.

“This period of isolation must be scrupulously respected,” Castex said.

The PM said that testing would be prioritised for those with symptoms, health workers and those who come into contact with infected individuals.

France is carrying out more than one million tests a week but this has led to real problems with many waiting up to a week for their results.

The PM did not announce any major restrictions but said he had asked authorities in Bordeaux and Marseille to come up with appropriate measures by Monday to stem a worrying rise in infections in the two cities.

Castex said the two cities have seen a worrying rise in infections among the elderly which has led to pressure on hospitals.

Authorities in “red” départements have been encouraged to impose localised measures against the virus. On Friday Castex said the number of red départements had been raised from 28 to 42, but did not specify what the new départements were.

“These measures must not be decided from Paris,” Castex said.

The government held a defence council meeting on Friday to discuss new measures to stem the spread of the virus across the territory, Castex did not announce sweeping measures, but urged the French “stay very prudent”.

Authorities in France have become increasingly concerned about the high number of infections in France, even if the death toll and admissions to intensive care are way off the highs recorded in March and April.

The head of the scientific council advising the government on the pandemic, Jean-Francois Delfraissy, said Wednesday that “tough” decisions may be required at the meeting.

People at high risk because of old age or health problems including diabetes, obesity and respiratory issues may require a protective “bubble” around them.

There was the danger of a “very rapid, exponential rise” in some places, Delfraissy said, singling out the French Riviera and Provence regions.

Castex himself is in a seven-day period of self isolation, having spent part of last weekend with the boss of the Tour de France Christian Prudhomme, who tested positive for Covid-19.

France's total death toll from the pandemic stood at 30,813 on Friday.