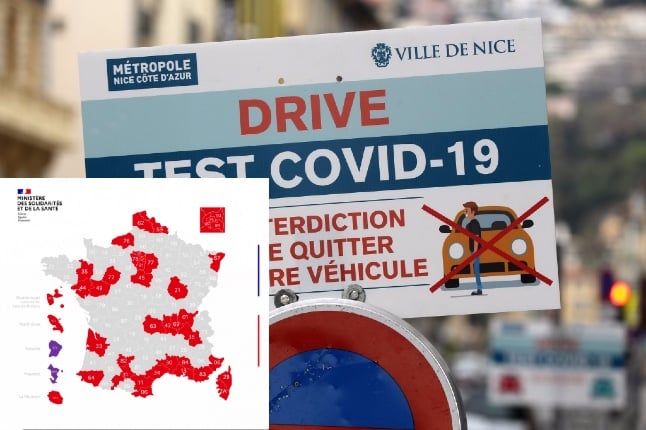 France has seen a sharp rise in Covid-19 cases over recent weeks across the territory, and the government this week bumped another 14 départements up to “red” alert.

Previously there were 28 (see map below) zed zones in France, but French PM Jean Castex announced the number had risen to 42 during a televised speech on Friday September 11th.

The government categorises a département as red when the spread of Covid-19 in the area reaches a level they consider alarming enough give local authorities extra powers to contain the spread.

A  red zone generally has recorded more than 50 new cases per 100,000 inhabitants in the last seven days, but the government also looks as other factors such as pressure on hospitals in the area.

In summary, if a département is classed as red it's not positive news.

France's Health Ministry published the latest list and a map of the 42 départements. The overseas départements of Guadeloupe, La Reunion and Martinique are also red zones.

Guyane and Mayotte are classed purple because they are still under a state of health emergency.

The government bases its decision to label a zone red on data collected by the public health agency Santé Publique France, which follows the development of Covid-19 in France in detail, both on a nationwide and a local level.

The ruling strategy since the end of lockdown has been to avoid nationwide blanket measures to the extent possible and rather trust local authorities with the power to take the best decisions adapted to their zones.

Some local authorities in hotspot areas have issued rules such as closing bars earlier than usual. In Marseille, which has been a red zone for several weeks, all bars bars and restaurants close at 11pm in a attempt to curb the spread.

To know exactly what it means to be living in a red zone CLICK HERE.