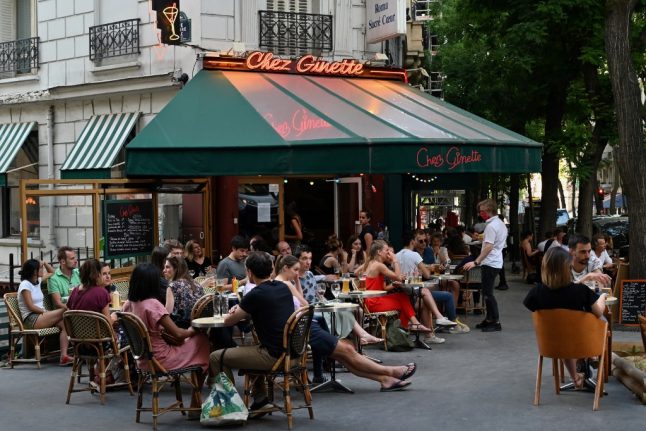 Parisians have been enjoying larger terraces than usual this summer, but could bars soon be closing earlier in the capital? Photo: AFP

Authorities in France are increasingly concerned about the high number of infections in France, even if the death toll and admissions to intensive care are way off the highs recorded in March and April.

French President Emmanuel Macron said the government would take decisions during the defence council meeting on Friday, suggesting new measures will be announced to curb the Covid-19 spread.

The government is under pressure from the Scientific Council set up to thrash advisory Covid-19 strategies.

“We have to control ourselves. Because the solution is social distancing,” Scientific Council Head Jean-François Delfraissy said.

Macron, who has repeatedly said France must avoid a second nationwide lockdown, said the decisions would be “adapted to regional conditions”.

He vowed not to “concede to any kind of panic,” but some local authorities in especially hard-hit areas such as the bustling port-city Marseille are braced for tighter restrictions on daily life.

Local authorities in areas identified as a red zone of “active circulation” by the health ministry already have the power to take extra measures to halt the spread, such as closing down bars or restrict travel. However the steep rise in cases might see the government push for tighter rules in hotspots.

READ ALSO What does it mean if my département in France is a red zone?

Here's a look at the different measures the government could be considering.

The head of the Scientific Council set up to advice the government on its coronavirus strategy on Thursday spoke out against closures of bars and bans on crowds, saying “that is not going to solve the problem”.

However some areas have already taken measures to close down bars earlier than usual to curb the spread, including in the Nord département in the north and in the bustling port-city Marseille, where bars must close at 12.30am.

Bar owners in Paris fear they will be next, as authorities in the densely populated capital fear that the rise in positive cases could lead to a pressure on hospitals in the regions.

There have been numerous reports in recent days of bars and nightclubs in Paris, packed with young people who are not respecting social distancing or face mask rules. This all adds to the pressure on the government to take action.

Capping the number of people allowed at public gatherings will be among the measures discussed.

After lockdown public gatherings with more than 10 people were banned in areas identified as high spread by the public health agency, but those rules were soon dropped. The limit is set at 5,000.

The Alpes-Maritimes prefecture on Thursday declared all public gatherings of more than 10 people had to be declared at least three days before the event.

Since the government began to ease lockdown mid May they have repeated that local authorities were best suited to adapt rules to their areas and that regional measures were better than blanket nationwide rules.

However the rapid resurgence of the virus could lead to the government asking authorities in especially vulnerable areas to take the extra step and go back into some form of local lockdown to halt the spread and alleviate pressure on hospitals.

The government has hinted that this could be the case for Marseille, where rising hospitals numbers have put a strain on health personnel.

“In Marseille, there is a subject of particular sensitivity (…) and therefore we must be able to take all the right measures”, Health Minister Olivier Véran told France Inter on Tuesday.

Local authorities in Marseille oppose such a scenario, with deputy mayor Samia Ghali saying the city would not cope with a second round of lockdown.

“It would create chaos in Marseille. It would not succeed, we will not be able to make it succeed,” she told BFMTV.

In Paris, the tone has been different with Mayor Anne Hidalgo telling BFMTV the city an eventual re-confinement would include the whole capital and not be done by district, as some suggested.

One doctor's collective has pushed for a rule making masks mandatory for children over 6 years old (currently the age limit is 11) in school, with one doctor telling France Info “it is the only way to limit [spread of the virus].”

However at present the government's stance is that making children under 11 years old wear a mask would be counterproductive.

READ MORE: These are the Covid-19 health rules in place in French schools

In May, the government banned all non-essential trips of more then 100km to curb the circulation of the virus between regions. Restricting travel is within the power of local authorities in red zones, although no authority has yet made use of this power.

Along with bar closures, closing down museums features among the measures available to local authorities in red zones and cities could restrict or close down access to museums completely. At present no local authority have made blanket rules on museum closures.

Scientific Council Head Jean-François Delfraissy on Thursday said elderly and people with health problems including diabetes, obesity and respiratory issues would need to be protected from the virus, although at present it is unclear what this would mean in practice.

In Nice, the city banned visits to the country's nursing homes for elderly, called EHPADs in French, , with Mayor Christian Estrosi saying the “serious situation” made “seemingly unpopular decisions” necessary.