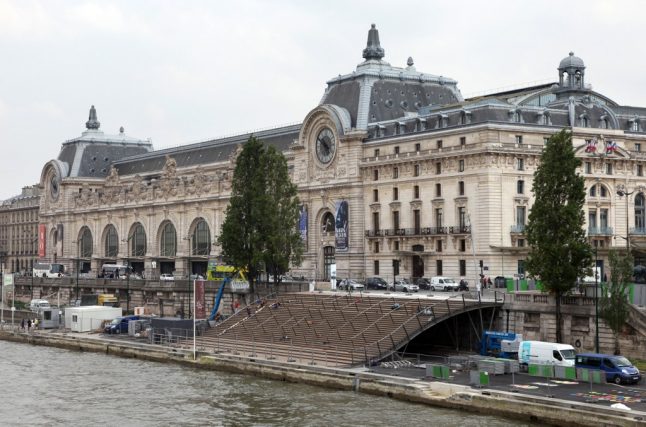 The incident prompted an outpouring of indignation on social media.

The Musée d’Orsay, a museum which is apparently happy to display many bare breasts in its permanent collection, shamed this young woman at the entrance and told her she couldn’t come in because her neckline was too revealing. Unbelievable https://t.co/behcr0kDu9

In a Twitter post on Wednesday, the woman, identified as “To” with the handle @jeavnne, recounted how two female agents confronted her to say she would be denied entry unless she put on her jacket, despite the summer heat.

“I asked them clearly, 'Why is the fact that I have a low neckline a problem?'… They didn't answer, they just insisted that rules are rules,” she wrote in a letter, next to a picture of her in the dress.

She also noted the irony of being shamed over her breasts at a museum that features a plethora of nude sculptures and paintings, including masterpieces by Edouard Manet and Gustave Courbet.

After accepting to put on her jacket and being allowed inside, she saw that plenty of women were wearing halter tops and other clothing that could be considered just as revealing, “but they were all skinny, with very small breasts.”

“I wonder if I would have been allowed in if I were wearing the outfits some of these women were wearing,” she wrote.

READ ALSO: Why are French women posting pictures of their cleavage on Twitter?

The account soon went viral and drew scorn from thousands of commenters.

The Musée d’Orsay in Paris apologises to a woman for not letting her enter the museum wearing a plunging décolleté top. Have they not looked at the nude portraits hanging on the walls? https://t.co/dezyFqGS95

“We deeply regret this and present our sincere excuses to the person involved, whom we are trying to contact,” the Musée d'Orsay said in a statement on Twitter.

It was the latest incident in recent weeks suggesting that France does not always live up to its reputation as a bastion of personal liberty, in particular when it concerns a woman's body.

Last month, Interior Minister Gerald Darmanin rebuked officers in the Mediterranean beach town of Sainte-Marie-la-Mer after they asked a group of topless sunbathers to cover up following complaints from a family.

And the Casino supermarket chain apologised last month after media reports recounted how a young woman trying to buy diapers in Six-Fours-les-Plages, near Marseille, was refused entry by a security guard who said her top showed too much skin.

“This attitude is unacceptable and we do not share these values,” Casino said on Twitter, adding that it condemned “all types of discrimination.”