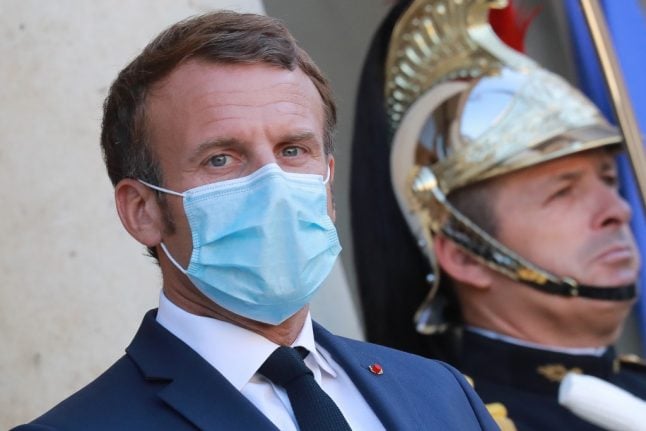 Fears of a second wave of the epidemic have been rising in France, with the number of new cases surging even though the death rate remains low compared to spring highs.

On Thursday president Macron said the government would take the necessary decisions to give the public an idea of what the weeks ahead will hold.

The government's defence council are due to meet on Friday after which new measures are expected to be revealed.

Suggesting new and stricter measures will be brought in on a local level where the virus was circulating more rapidly Macron said the decisions would be taken on a regional basis (déclinées territorialement).

But he vowed not to concede to any kind of panic.

“What we need to do is to adapt to the evolution of the virus and try to slow its circulation with hygiene measures and adapting our social lives,” he said.

“We need to be able to continue to live, educate our children and care for other patients and illnesses and to have a social and economic life,” he added. The government may have to take “a certain number of tough decisions” he said, probably within 10 days.

“France is now at a worrying level which is not far behind Spain, with a lag of maybe two weeks, and much more severe than that of Italy,” Delfraissy told the news briefing, which was held online.

The fact that new cases had not yet swamped the health system might have created “a false sense of security”, Delfraissy said.

As well as over 8,500 new cases the number of intensive care patients suffering from coronavirus rose to 599 on Wednesday – a steep increase of 71 from the previous day.

Four regions in France are badly hit by the resurgence in infections – the greater Paris region of Ile-de-France, Provence-Alpes-Côte d'Azur in the south, L'Occitanie in the south west and Auvergne-Rhône-Alpes in the centre. The warning from the Scientific Council comes a day after Prime Minister Jean Castex entered a seven-day period of self-isolation, having spent part of the weekend with the boss of the Tour de France who tested positive for Covid-19.

There was the danger of a “very rapid, exponential rise” in some places, Delfraissy said, singling out the French Riviera and Provence region.

Some French regions could see emergency services overwhelmed in coming weeks if no fresh measures were taken, he said, adding any new steps taken required two weeks to have an impact.

The French President Emmanuel Macron and his ministers have repeatedly made it clear they are opposed to a repeat of the nationwide lockdown imposed in March due to the devastating impact it would have on the economy.

Authorities will consider possibility of introducing local lockdowns especially hard-hit areas such as the southern port-city Marseille, where spiralling coronavirus rates prompted an upsurge in the number of patients in hospitals and intensive care units.

Health Minister Olivier Veran said the situation would be a matter of discussion during Friday's defense council meeting and that nothing was ruled out for Marseille or any other area with rising rates.

“We will look at all indicators for the epidemic situation and make any proposals that could be necessary,” Veran said.

In Paris, critics have slammed bars for not complying with rules of compulsory face masks for anyone moving around their establishments, after videos emerged of unmasked people dancing closely together, even while nightclubs have been prohibited from reopening.

Some called for police to ramp-up controls or even close establishments, a power local authorities achieved when the interior ministry bumped Paris up to a red zone of high level of coronavirus.

READ ALSO What does it mean if my département in France is a red zone?

The Scientific Council's Delfraissy, meanwhile, spoke out against closures of bars and bans on crowds, saying “that is not going to solve the problem”.

The government may also have to become more forceful in some areas about imposing confinement measures for infected people and those they have been in touch with, he said, although this was not for now an official recommendation.

People at high risk because of old age or health problems including diabetes, obesity and respiratory issues may require a protective “bubble” around them, according to the council which advises the government on its Covid-19 policy.