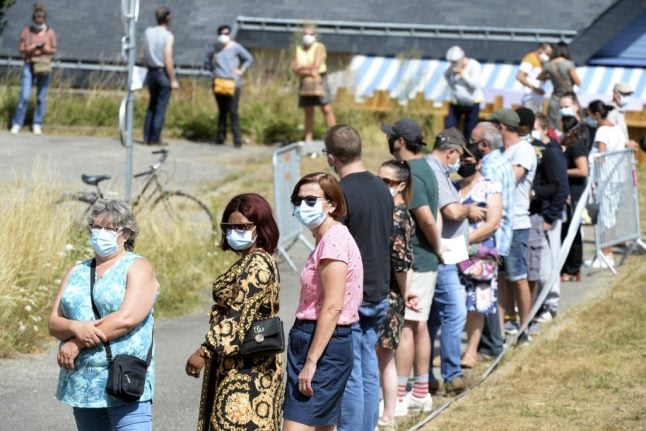 People queue to get a Covid-19 test in Laval, western France. Photo: AFP

When French Health Minister Olivier Véran promised one million tests per week by September 1st, it was in response to mounting complaints in France that the country was testing too little meaning it was too late to keep track of the coronavirus epidemic in the country and effectively break up transmission chains.

The government kept its promise and the national health agency Santé Publique France reported on Thursday that 1,059,303 Covid-19 tests had been effectuated over the course of last week.

“Why one million? It is not a totem, just a reflection of our effective capacity to test,” Véran said at the time.

But simply ramping up the number of tests only led to other problems.

France's testing centres, or laboratoires (labos) are struggling to deal with the number pf people who want to get tested. It's common to see long queues snaking around the streets as people, some potentially infected and contagious, queue for hours.

“We arrived at 7am, so now we have been waiting for 2.5 hours,” a teenage girl waiting outside a testing centre in the Parisian suburb Neuilly-sur-Seine told French daily Le Parisien.

Twitter is full of tales of the struggles to get a test in France as well as the main problem of having to wait several days for the result.

“Husband has a fever. Doctor says take the test. After calling all the labs in Rouen there is no appointment within 7 days, then plus five days for the results. Otherwise we can queue for two hours, but he's ill so no energy. Question: Is a test really worth it seven days after the first symptoms?,” said one post on Twitter that summed up the dilemmas of many.

And those managing the test centres are often the target of the public's anger.

“People threaten to sue us because they missed their plane due to delays in testing. We work like crazy and everyone is unhappy,” a lab manager in Toulouse told 20 minutes. People queue outside the a test centre in southwestern France. Photo: AFP

Pascal Crépey, an epidemiologist and professor at the Rennes School of Higher Public Health Studies (EHESP) sounded the alarm weeks ago that France was lacking the lab capacity to keep up with the number of tests carried out.

“The issue is not just the number of tests, it's who you test and ensuring that the whole process goes quickly so that the contact tracing strategy works,” he told The Local.

If a person gets tested and then has to wait a week for their results, “that's a problem,” Crépey said.

At the beginning of the pandemic France urged those with symptoms to self-isolate and not to get tested, but once capacity was increased and infections were slashed during lockdown the strategy changed.

Anyone with the slightest doubt was encouraged to get tested, free of charge.

Pop up test centres appeared at places like Paris Plages (the Paris city beaches) and at town halls with many of those queuing doing so simply because they wanted to take a test before departing on holiday or visiting grand parents.

I should perhaps hasten to add that this is NOT how it works in reality – at least not here in #France where waiting times to get a test and results are so long that you may as well not get tested at all. The government is promising faster, easier access in the next few weeks.

But it resulted in long delays for results – up to 6 days – which led to criticism that the tests were basically pointless if people were not self-isolating in the meantime.

“If people don't know they are infected and don't self-isolate, they may infect others. Then the whole contact tracing strategy fails,” Crépey said.

EXPLAINED: Where and how to get a Covid-19 test in France People wait in line to get tested for Covid-19 in Paris. Photo: AFP

France's post-lockdown strategy to “test, trace and isolate” was built on the idea that, by massively testing the population the country would be able to detect Covid-19 breakouts in time to prevent the spread from spiralling out of control.

But a much feared second wave of the virus appears to advancing at pace, despite the mass testing.

French health authorities on Tuesday reported that they had detected 91 new coronavirus clusters over the past 24 hours, putting the total at 612.

A total of 71 départements in France were placed on the health authorities Covid-19 risk list, signalling that the virus was circulating at an alarmingly high pace.

In Marseille, south of France, hospitals this week reported that intensive care units were seeing a surge in the number of patients and they were almost at capacity.

'It will only get worse'

“The problem is only going to get worse,” said Daniel Camus, an epidemiologist at the Pasteur Institute in Lille.

As the weather turns colder, more people would get sick in general, Camus explained.

“More children will have runny noses, more people will want to get tested to see if they have the virus, that's when we'll see the real problems,” he said.

It's not just test centres that are facing a backlog. Doctors surgeries are also overrun, many with parents trying to get appointments for children who have Covid-19 like symptoms, which prevents them from attending schools or creches.

Currently the fear is that the systemic backlog is preventing vulnerable people most at risk, or those close to them like medical workers and families, from being tested quickly enough. Last week some 79 percent of those turning up for tests had no symptoms.

But at the same time France and other countries around the world are faced with the problem of trying to identify asymptomatic cases, who are capable of passing on the infection to more vulnerable people.

Up until now, over half of all the people that have tested positive for Covid-19 in France were so-called asymptomatic cases.

Testing can help identify them, but the results need to be delivered quickly so they can self-isolate and not infect others.

This is of course not just a problem in France. The UK has also struggled to cope with the surge in testing with the country's Health Minister saying Matt Hancock saying the problems are caused by people getting tested when they are not ill.

So what was the best solution?

“They are doing it haphazardly. There's no logic, no strategy and that's not good. What's needed is much more tests, maybe 10 million per week, and that might not be enough,” she told Channel 4.

“It's only by finding those who are contagious that we can stop the epidemic,” she said.

For now the French government has promised to increase the number of testing labs in the hardest-hit areas.

And in a bid to shorten the queues in the hard-hit Paris region, authorities on Wednesday launched a new kind of test that enables people to get their results on the spot.

Health minister Olivier Veran said the new tests, called antigénique rapide in French will deliver results in 15 to 20 minutes, although the downside is that they are less reliable than the PCR tests.

But ramping up such capacity is not done overnight, Camus said, seeing as “it requires advanced technical skills”.

Camus said a person should go and get tested if they presented symptoms of the virus.

“If we see a difficulty in getting people tested, priority should be given to those with symptoms and who are at risk of getting seriously ill form the virus, these are old people or people with pre-existing serious illnesses,” Camus said.