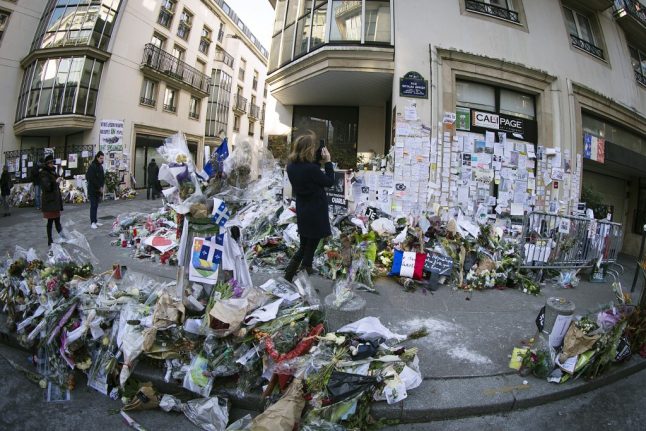 A woman takes a photo outside the headquarters of French satirical weekly Charlie Hebdo in Paris on February 7, 2015, as she stands near flowers layed in memory of victims one month after a deadly jih

Corinne Rey, 38, known as Coco, had gone outside on January 7, 2015, for a cigarette when the brothers Cherif and Said Kouachi approached her and forced her to tap in the entry code for the office as they brandished a Kalashnikov.

“I had a sense of dread,” she said, her voice shaking with emotion.

“I was in distress, I could not think anymore,” she told the trial of 14 suspected accomplices in the January 7-9 attacks on the magazine and a Jewish supermarket that left claimed 17 lives.

“I knew it was a Kalashnikov,” she said, recalling the long climb up the stairs before entering the offices of Charlie Hebdo, with the Kouachi brothers “armed to the teeth”.

“I was devastated, as if dispossessed of myself, I could no longer do anything. I moved towards the code keypad and I typed it in,” she recalled. “I felt that the terrorists were approaching their goal, I felt them growing
excited next to me.” French cartoonist Corinne Rey, also known as 'Coco', who appeared as a witness, leaves the courtroom at the Paris courthouse, on September 8, 2020. AFP

Entering the offices, the attackers shot at Simon Fieschi, the administrator of the weekly's website. Rey said she ran to hide under a desk.

“After the shots, there was silence, a silence of death… I thought they were going to finish off the job with all the ones they hadn't killed.”

But after killing 10 people inside the office, the attackers left, leaving behind a vision of “horror.”

“I saw the legs of Cabu. Wolinski was not moving. I saw Charb — the side of his face was extremely pale. Riss was wounded and he told me, 'Coco, don't worry'.”

Jean Cabut, known as Cabu, 76, Georges Wolinski, 80, and Stephane “Charb” Charbonnier, 47, were among France's most celebrated cartoonists. All lost their lives in the massacre.

Laurent Sourisseau, known as Riss, was shot and wounded but survived. He is now Charlie Hebdo's director.

“This is the talent that was killed that day, they were models for me,” Rey said. “They were extremely kind people, who had a talent for being funny … It's not easy to be funny, but they were able to do it very well.”

'I am not the guilty one'

Five years later, Rey said she still struggled with the memories of the attacks as well as sensations of impotence and even guilt.

“It took me a long time to understand that I am not the guilty one. The only culprits are the Islamist terrorists. The Kouachis and those who helped them,” she told the court.

Sigolene Vinson, a former lawyer turned legal correspondent for the newspaper was in the newsroom on the day of the attack.

She told the court how when they heard the first two shots, she exchanged looks with Charb. “I think that Charb understood,” she said.

She recalled the terrible silence after the gunfire, and then the sound of steps coming towards her, where she had taken refuge against a wall.

“I understood the killer had seen me and the he was following me. I thought 'It's my turn'.”

But Cherif Kouachi told her he was sparing her because he did not kill women.

She described the carnage around her in graphic detail.

Investigative journalist Laurent Leger told the court it was only because he had thrown himself under a table that he survived.

“I was incredibly lucky,” he said.

The trial, which began on September 2, is expected to continue until November, reopening one of the post painful chapters in France's history even if those on trial are only suspected accomplices of the attackers, who were killed by police in the aftermath of the massacre.

Defiant as ever, Charlie Hebdo last week republished cartoons of the Prophet Mohammed that had sparked anger across the Islamic world, drawing new condemnation from states including Iran, Pakistan and Turkey.