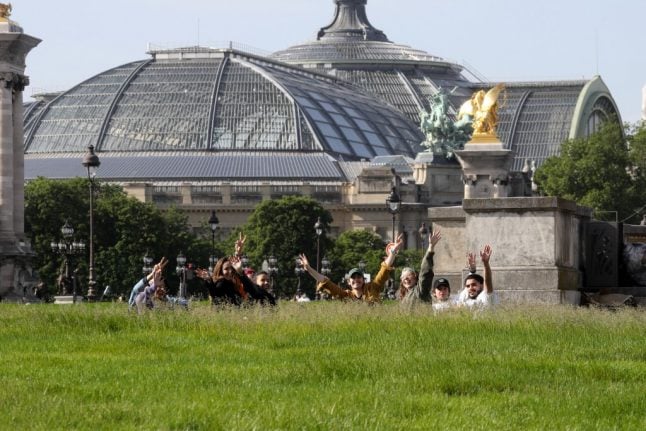 The traditional la rentrée (the French term for returning to school and work after the summer) has so far been dominated by face masks and hand sanitising gel, but lacking of international students.

With more than 300,000 foreign students coming  every year, France is one of the most popular higher education destinations in the world.

The Covid-19 pandemic has put the brakes on this year's arrivals and created difficulties for international students, making both the process of getting a visa and a flight over to France complicated affairs.

Eric, a graduate from Chicago, who was supposed to study tourism at the Sorbonne 1 University in Paris this autumn saw his plans postponed by Covid-19.

“Once the full travel ban was relaxed in July allowing for essential travel, it took over six weeks for an opening visa appointment with VFS Global in Chicago, (the body in charge of issuing visas)” he told The Local.

“Besides the issues with the pandemic, the two-three month lockdown delayed the acceptance letter which pushed everything back with housing, visas, flights etc. which are all tied together.”

“As it stands it will delay my arrival three to four weeks after classes start,” he said.

READ ALSO: Why 'la rentrée' means so much more in French than a new school year Eric is not the only one who saw his plans to come to France delayed.

One hundred students from India enrolled at the French business school ESSEC were unable to attend their semester start at the end of August because they didn’t get their visas on time.

“Universities are flexible and are willing to accept international students even if they arrive after semester start,” Florent Bonnaventure, the head of Communication & Studies Department at Campus France, an organisation that helps foreign students, told the Local.

“Regarding visas, as soon as French consulates reopened, priority was given to international students and researchers,” said Bonnaventure.

“Since August 15th, they are on the list of exemptions to the travel ban and can come to France. Visa issuing has started again, and while not all of them have been issued, the process is ongoing,” he said.

So will there be a noticeable downturn in the number of international students coming to France?

“We don’t have set figures on a potential drop,” said Bonnaventure from Campus France.

“What we know is that applications have gone up 20 percent and that the number of offers of admission are about the same as last year. Some are still in process, some have delayed their arrival, others defer it for a year. (…) We’ll know more in the autumn, but we hope the decrease will be limited.”

READ ALSO: What international students should know before apartment hunting in Paris

A fall in the number of students

But universities prepare for a scenario where many students won't be able to come at all.

With 85 percent of their students being international students, the American University in Paris said it predicted a drop in campus numbers this autumn despite the travel ban being lifted for students.

“Some of our students have had trouble securing appointments for their visas or obtaining the necessary PCR test within 72 hours of traveling. Given rapidly evolving legislation that can vary from country to country, on top of the uncertainty of travel in general, we expect fewer students on campus this fall,” AUP's Provost Dr. William Fisher told The Local.

The University of Poitiers in west-central France, which welcomes many students from Latin America, said it expected at least 20 percent of enrolled foreign students to experience difficulties that may even prevent them for taking up their places.

Sciences Po’s head of international affairs Vanessa Scherrer is on the contrary quite confident.

According to a survey led by the school, 68 percent of international students said they would be coming despite the ongoing crisis.

Out of the 14,000 students at Sciences Po, 47 percent are international and losing them would have been catastrophic for the university.

READ ALSO: Being an international student in France: What you need to know

A double campus, online and offline

In order to cope with the situation, universities have adapted to be able to teach both on campus and online.

“Our focus this semester is on in-person learning on campus, but we are preparing to teach hybrid classes where some students are on site and some are online”, AUP's Dr. William Fisher told The Local.

“Classrooms have been fitted with new cameras and microphones to ensure the smooth delivery of content whether a student is in the room or across the globe. Most of our teaching will be in synchronous classes but in instances where many students are remote and in distant time zones some of the work will be asynchronous,” he said.

Regarding the future, “we continue to expect the unexpected and to plan for multiple scenarios,” he said. A student wearing a face mask on the deserted campus of Bordeaux University on April 1, 2020. Photo: AFP.

Practical difficulties aside, some students are simply reluctant to live abroad during the pandemic.

“We have cancellations from students who are scared to come to France because they fear that there will be a second wave and that they will get stuck here. In some cases, it even comes from their universities who forbids them from coming,” said Christine Fernandez, the vice-president in charge of international students at the University of Poitiers to France Info.

The students themselves have expressed concerns about the health issues but also the restrictions on daily life, such as obligatory face mask rules, that may impact their time in France.

“Covid has also made me worry about my health and immune system given the increasing cases and compulsory wearing of masks everywhere. Moving is already stressful enough,” Eric told The Local.

“In reality, who really wants to explore and enjoy Paris and France masked all the time. Let alone how this will impact teaching, socialising and participating on campus in and outside of the classroom. It is a complete downer,” he said.