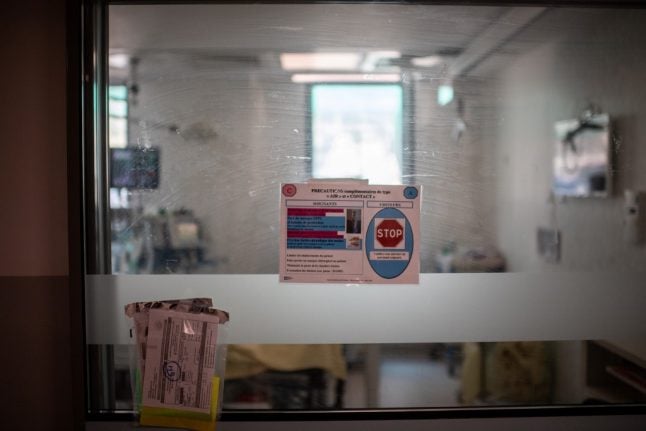 The number of new cases of the virus reported in France has been rising 'exponentially' for several weeks now, from around 500 cases per day in mid July to 7,000 a day in recent days.

However until last week although case numbers were rising sharply, the number of people getting seriously ill or dying with the virus stayed stable, prompting some to hope that the virus had weakened and become milder.

But over the last week France has reported a small but steady growth in two key areas; the number of Covid-19 patients in intensive care and the number of people dying with the virus.

READ ALSO ANALYSIS Is France heading for a second wave of Covid-19 infections? There are now 461 Covid-19 patients in intensive care, up from 380 two weeks ago. While this is not a massive rise, the general trend has been for slight increases on most days over the last fortnight.

Similarly the daily death rate is also showing a small but steady increase, with 21 people dying in hospital in the previous 24 hours, compared to 17 two weeks ago. While the increase is not large, there has again been a general trend of slight increases over the last week.

The total number of patients in hospital remains stable at 4,643 compared to 4,748 two weeks ago.

Compared to the peak of the epidemic in April these numbers are all low – at its height there were more than 7,000 patients in intensive care and deaths peaked at 800 a day.

In the past 24 hours 7,157 new cases of Covid-19 have been confirmed and although testing in France has been ramped up and now stands at 800,000 tests a week, health experts say the increased testing alone cannot account for the increase in cases. The percentage of people testing positive now stands at 4.4 – up from 3.3 percent two weeks ago.

There are now 60 départements – out of a total of 101 – that are classified as of concern to health authorities and the French government has divided the country into red, orange and green zones, with health rules applied more strictly in red zones.

MAP Red, orange and green Covid-19 zones and what the colours mean

Over the summer many of the people testing positive for the virus were younger people who to tend to be less badly affected, but public health experts warned that if the virus began to widely circulate older and more vulnerable people would begin to be infected, and were more likely to suffer severe symptoms and be admitted to hospital.

This week in France marked la rentrée, when schools reopened and many French people went back to work after their summer holidays.

The government has introduced strict new rules on mask-wearing in the workplace and many French cities have also made masks compulsory in all outdoor spaces in a bid to halt the spread of the virus as people return to the cities and the workplace.

IN DETAIL France's new rules on masks in the workplace

Masks are also compulsory in all indoor public spaces and on public transport, at risk of a €135 fine.