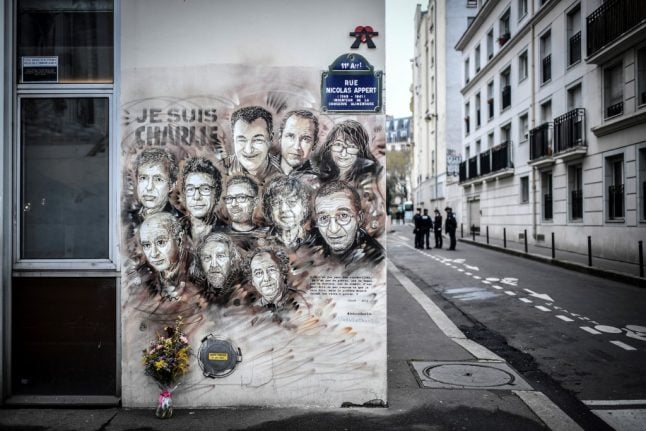 A tribute to the Charlie Hebdo staff killed in the 2015 terror attack. Photo: AFP

But observers say a deep-rooted tradition of unapologetically poking fun at men and gods alike may be in peril five years after the deadly jihadist attacks on satirical magazine Charlie Hebdo, the national flag bearer of outrageous commentary.

As many as two million people and 40 world leaders marched in Paris after the massacre in January 2015, in a fierce defence of freedom of expression eternalised by the rallying cry: “I am Charlie”.

But as 14 suspected accomplices go on trial over the attacks on Wednesday, some seem to have lost their appetite for affront.

Only half of French respondents to a survey conducted by pollsters Ifop for Charlie Hebdo in February this year said they supported the “right to criticise, even outrageously, a religious belief, symbol or dogma.”

Most opponents were under 25.

This is a shift for the first country in Europe to decriminalise blasphemy – officially in 1881, but in practice already in the aftermath of the 1789 revolution.

“In a world that calls itself secular, a France that describes itself as less and less religious, blasphemy has paradoxically become a major taboo,” said Anastasia Colosimo, a professor of political theology at the Sciences Po university in Paris.

“Anti-clericalism or atheism is increasingly seen as offensive. It is no longer fashionable.”

Defiant as ever, Charlie Hebdo on Wednesday republished hugely controversial cartoons of the Prophet Mohammed to mark the start of the trial, including a cartoon of the prophet drawn by its cartoonist Cabu, who lost his life in the massacre.

“All of this, just for that,” the front-page headline said. Director Laurent 'Riss' Sourisseau wrote in an editorial: “We will never lie down. We will never give up.”

French President Emmanuel Macron responded to the news by paying tribute to the victims of the attack on Charlie Hebdo and defending the “freedom to blaspheme”.

“The refusal of the concept of blasphemy is imprinted in the very origins of the (French) republic,” political historian Jean Garrigues told AFP.

“It is linked to the history of the Church, to the supremacy of the Catholic Church in French society and (its) association with the monarchy” overthrown by revolutionary republicans.

“It is something that truly goes to the heart of French identity.”

But some have pointed to a creeping tendency to self-censor, driven partly by fear of violent retribution of the kind unleashed on Charlie Hebdo by brothers Cherif and Said Kouachi five years ago that killed 12 people, including five cartoonists.

“With the attack of 2015, the reality of risking one's life resulted in even stronger self-censorship,” said Colosimo.

Charlie Hebdo prides itself on being an equal-opportunity offender of bigots and religious leaders of all persuasions. But it came in for particular criticism for some of its Mohammed drawings, and not only from Muslims.

Others say the publication has lost its zest, and one of its most outspoken journalists, Zineb El Rhazoui, quit in 2017 claiming it has gone soft on Islamist extremism.

But she applauded its decision to reprint the cartoons, describing it as a victory for the “right to blaspheme”.

Riss, who lost the use of his right arm but survived the 2015 attack by playing dead, told AFP in January there was a general tendency in France for political cartoons to be “extremely consensual”.

Critics say freedom-of-expression protections have progressively been watered down.

In 1972, the so-called Pleven Law, in a bid to fight racism, created the offences of insult, defamation, and incitement to hatred, violence or discrimination.

Holocaust denial has been illegal in France since 1990.

“Since the Pleven Law, we have only toughened prohibitions, increased penalties and reduced … rights,” said Colosimo.

In January, a renewed debate about freedom of expression erupted when a teenager received death threats for calling Islam “a shitty religion” in an expletive-laden Instagram rant.

France's then-justice minister Nicole Belloubet, while decrying the threats against the girl, came in for widespread criticism for saying she had committed an “insult to religion”.

President Emmanuel Macron came out in a strong defence of the teenager, Mila, and the right of all French people “to blaspheme, to criticise, to caricature religion”.

“Freedom of expression does not exist to protect pleasant discussions,” said Colosimo. “It is there to protect discussions which offend, which shock, which alarm.”