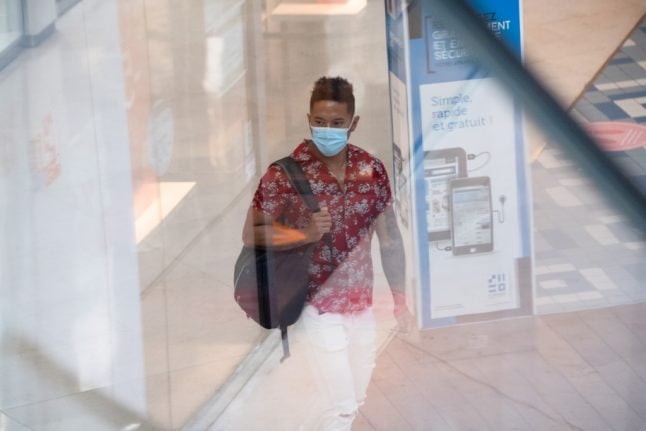 Employers will have to ensure their employees have access to masks in shared offices. Photo: AFP

The new rules entered into effect on Tuesday, the day of la rentrée in France when schools reopened and most people returned to work.

“I think it's very important that all the French people who are going back to work are reassured in knowing that workplaces apply the right rules to protect their health,” Labour Minister Elisabeth Borne told BFMTV.

The French labour ministry had earlier declared a blanket rule imposing face masks in all shared indoor workplaces, but, following discussions with unions and businesses, Borne this week announced that they would amend the rules to include what she deemed to be necessary exemptions.

The labour ministry published an updated version of the health protocol on Monday evening, just hours before the rules would enter into effect at midnight. The new protocol makes the rules a lot more complicated and brings in many exemptions to the general rules.

Here's a look at them;

Both the private and public sector are concerned and the labour ministry said it will ramp up inspections to ensure compliance with the new rule.

Where will I have to wear a mask?

In good news for the bosses, employees who have access to their own individual office will not have to wear a mask when alone at their desk, but they will have to put one on whenever they leave their office or if someone pops in for a chat.

Those working outside must put on a mask if they cannot maintain a 1 metre distance between themselves.

People working in vehicles will have to wear a mask when in presence of others.

Masks were already compulsory for employees in a long list of public-facing roles such as waiting staff, shop staff, bank and administration staff, museum staff, library staff and so on.

Yes, quite a few.

The protocol specifies that the general rule “may be adapted by companies to respond to particularities” in their business “after having carried out an analysis of the transmission risks of SARS-Cov-2 and the preventive measures that ought to be put in place.”

Those working in a workshop or studio doing jobs that are above average physical intensity can work without a mask “provided that the air conditioning complies with the rules in place, the number of people present in the area is limited and that they keep as much distance between themselves and wear a visor.”

A visor is a full-face plastic shield suspended from a headband. They do not count as a mask under the French rules.

READ ALSO: Fabric, surgical or filter – what are the rules in France on mask types?

What about inside open plan offices?

Employees working inside shared open spaces must wear a mask at all times, although the protocol has laid out a section of 'mask breaks' that can be organised within the business.

“It is possible to temporarily remove your mask at certain times of the day, if a number of measures are taken,” according to the protocol.

The legality of organising such breaks depends on the degree of coronavirus spread in the area. The rules are stricter in “red zones” than in “green” zones with relatively few cases.

These are the rules:

In green zones, office workers may take mask-breaks if the office has a functioning ventilation system, their desks are separated by a protective shield, they have visors and their office has a functioning Covid-19 prevention policy in place. This policy must include a “coronavirus representative” and setting up a procedure on how to quickly act if an employee experiences coronavirus symptoms.

Orange zones must comply with all the four criteria in place in green zones, plus a condition that masks may only be removed in large spaces with a high-functioning airing system.

In red zones all these criteria must be fulfilled, but the ventilation system must be mechanical and the office must be large enough to guarantee a space of at least 4 square metres per employee.

Employees in offices complying with the set rules may not work, however, work the whole day without a mask, the protocol specifies.

It is up to the business to “organise rules inside collective spaces” adapted to their conditions.

Rules on lunch breaks or eating and drinking in the office were not specified in the protocol, so per now it seems that offices with communal eating areas such as kitchens will need to adapt their rules internally.

The government said they will provide more details on the rules for situations where wearing a mask is incompatible with the task performed in the days to come.

Who decides the colours of the area?

There are two different colour maps currently at play in France, one made by public health agency Santé Publique France and the other by French health ministry.

They use different criteria for their colours leading to some variation between the départements, but both are taken into account here. If one public authority declares a département red, this means the offices in that area must comply with the criteria made for red départements.

Santé Publique France updates its colour map each Thursday evening and the protocol states that any changes in rules for workplaces enter into effect that following Monday.

Do I have to buy the masks myself?

Not if you are an employee. The costs of the masks must be covered by the employer, who is also responsible for ensuring that their employees have access to masks, the labour minister said.

“It is clearly the employer's responsibility,” the Borne told BFMTV.

Why are they doing this?

Borne said the new plan was based on a growing scientific consensus that Covid-19 spreads not only in large drops projected when a person coughs or sneezes, but also in smaller ones that can remain suspended in air breathed out by infected people.

The workplace has also been identified as one of the main sources of Covid-19 clusters, although only 20 percent of France's total coronavirus cases stem from clusters.


What happens if I don't wear a mask?

You could get in trouble with your employer, who will be, according to what the government has stated on the matter, within their rights to sanction you for disobedient behaviour – even including firing you in extreme cases.

“The employer may give the employee a warning or consider it a fault,” said Alain Griset, Minister Delegate of Small and Medium Businesses, to BFMTV, adding that “one of the possibilities”  would be to fire the employee.

The government previously also said they intend to ramp up the number of checks to make sure that businesses respect the new rules.

Do I have to go into work?

If your job permits you to work from home, you may ask your employer to work remotely instead of going into the office.

Working from home is “recommended if it helps the process in preventing the risk of SARS-CoV-2 infection and limits the number of people on public transport.”

Télétravail: Your rights and responsibilities if you work from home in France

Labour Minister Elisabeth Borne previously said keeping those who can on remote working will help alleviate pressure on public transport in densely populated cities such as Paris, giving more space to key workers who have to commute to get to work.