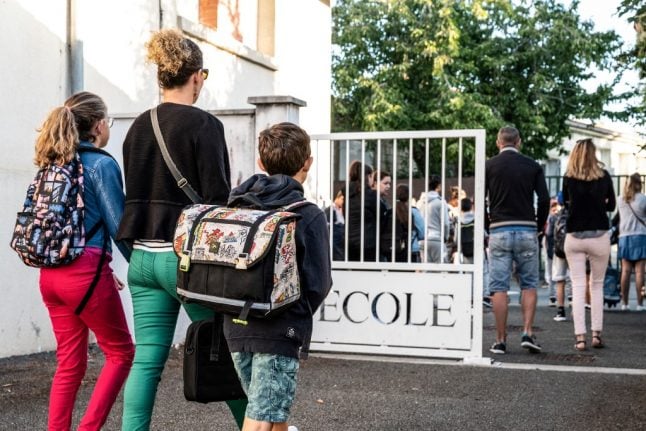 French pupils are now back to school after months away from their teachers.

This year la rentrée des classes has a lot of extra rules and health regulations in place, but a lot of things remain the same. From supplies to le périscolaire, here is everything you need to know before going back to school.

Les fournitures scolaires – Before D-Day, there is every parents’ nightmare: the school supply trip to the supermarket. And know that in France, it is sacred.

But there's a reason to why the list your child’s school gave you is so long. In France, it’s common to put everything together, meaning that the first day of school teachers gather all the supplies and only take them out when a pupil needs something.

Some schools even ask for everybody to purchase the same brand to avoid mockery and discrimination.

L’ardoise – In primary school especially, it is more than likely that your child’s teacher will ask for one. It's generally translated as 'slate' but there's no need to climb on the roof to get one, supermarkets sell these mini-blackboards that your child will most generally use to do some mental arithmetic or handwriting practice. It's actually quite a good way to save wasting too much paper in the early stages of school.

La gardienne d’école – The school guard is the person in charge of opening and closing the school so will probably be the first staff member you meet at the school gates (and will be the one to tell you off if you're late).

Generally the gardienne lives on site and reports to the municipality and not to the headmaster. She (or sometimes he) “takes care” of the school in cleaning it, making sure it is safe for children and also answers the school's phone.

Les surveillants – In secondary school and high school, there are generally so many pupils that surveillants are needed. These are non-teaching staff who mostly help with supervising the youngsters when there are not in class (recess, lunch break, office hours…) and do administrative work as well.

Le baccalauréat – This is the big exam that marks the end of French students' secondary education.

It's recently undergone some fairly major changes. Before the reform, there were three main types of Bac, the general one, the technological one and the professional one. The pupils used to choose a specific path at the end of the seconde (the first year of high school).

A reformed version of the baccalauréat général was introduced in 2019. Seconde students now have to pick three specialty subjects from a wide-ranging list and 40 percent of their eventual grade comes from continuous assessment.

Le périscolaire – This extended school program is very practical for parents who work beyond schools hours. Held in the morning (usually from 7.30am), in the evening (up until 6pm) it includes : La cantine scolaire – In France, children generally don’t go to school with their lunch box, they are provided with healthy meals in exchange for a certain amount of money per month from the parents (the price of the meal is calculated in regards of the family’s earnings).

The menu changes every day and each meal is composed of a starter, a main dish, cheese or a dessert.

Les vacances scolaires  – In France, the school holidays dates vary across three 'zones' so you will need to know which zone you're in.

Some holiday dates are the same across France while others vary according to zones.

Les jours fériés – There are a lot of public holidays in France and schoolkids get them off too, here is the list for the 2020-2021 school year :

May 13th to May 17th : Ascension weekend

The rest of the public holidays fall on either weekends or during the school holidays.

And you will also need to know about the types of school;

Se faire coller – to get detention