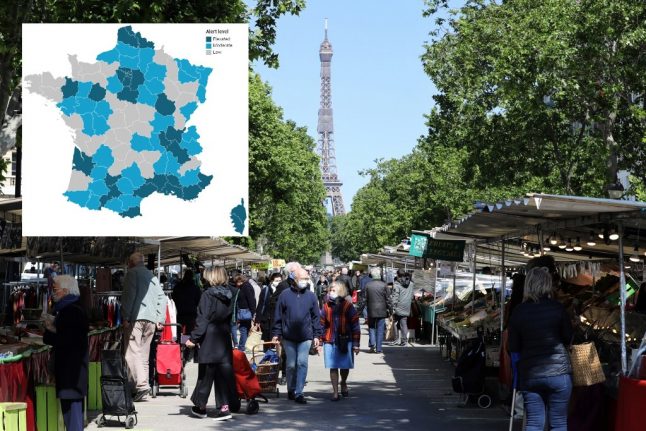 France has massively expanded its coronavirus testing programme since the beginning of the pandemic. Photo: AFP

Those who can remember as far back as the distant past of May when France began to emerge from lockdown (and doesn't that seem like a long time ago?) may recall that the country was split into red zones and green zones, with different rules depending on which zone you lived in.

While the health ministry is labelling certain departements as “red zones” which means local authorities have extra powers, the health body Santé Publique France (SPF) has a different system.

It labels départements according to the spread of Covid-19 cases with the categories “elevated”, “moderate” and “low” depending on the circulation of the disease.

Here's how it works;

Dark blue – 'Elevated' – départements where more than 50 new cases of Covid-19 have been reported per 100,000 inhabitants in the last seven days

The designations can change every day – click here for the latest updates.

Départements that are labelled as red zones gain extra powers for their local authorities to impose rules and restrictions if they believe it necessary. Authorities in the Marseille département of Bouches-du-Rhône have used this power to close the city's bars at 12:30am each night.

Among the other powers that authorities can use are;