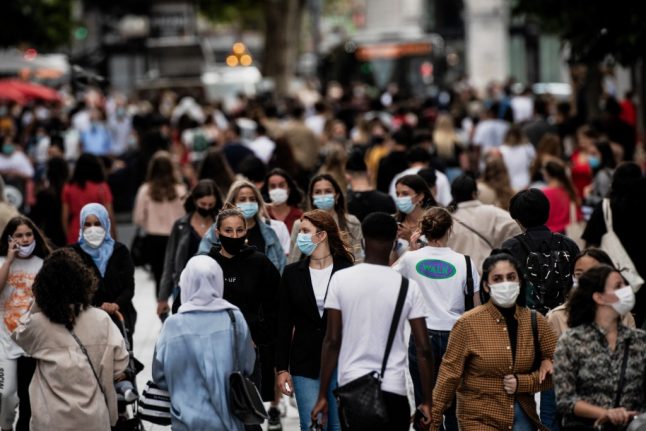 People in Lyon have been wearing face masks outside in some streets for a while, but now the rule has been extended to the entire city. Photo: AFP

The two cities were the last in line to render more strict their rules on mask-wearing, following in the footsteps of seven other cities (Paris, Nice, Marseille, Orléans, Bordeaux, Toulouse and Strasbourg).

MAP: French towns and cities where masks are compulsory

In Lyon local authorities had already made masks mandatory in certain parts of the city, a rule that was extended to the entire city of Lyon and Villeurbanne, announced the préfecture (the senior local authority) of the Rhône département on Monday evening.

Joggers and cyclists were exempt from the rule along with children younger than 11.

In the rest of the Rhône département masks must be worn everywhere outside that is within 50 metres from nurseries, primary schools, middle schools, high schools and higher education establishments, as well as entrances and exits of train stations, metro stations, tram and bus stops.

In Rouen, capital of the Normandy region and home to some 650,000 people, masks will be mandatory as of Wednesday morning in all outdoor public spaces from 7am until 2am.

Here too, children of less than 11 years old were exempt from the rule, along with joggers and cyclists.

Both Lyon and Rouen have seen a rise in the number of new coronavirus cases identified in their areas over the past weeks.

Lyon’s Rhône département was bumped up to the highest alert level and became one of France’s 21 “red zones” after having passed the threshold of 50 new cases per 100,000 inhabitants.

The rate of positive Covid-19 tests had surpassed the French average of 4.2 percent, reaching 6.4 percent in Lyon and more than 10 percent in Villeurbanne.

“The situation is deteriorating and we are facing a collective challenge. We protect ourselves individually, but we above all have to protect others,” said Grégory Doucet, Mayor of Lyon, during a press conference on Monday.

Rouen also exceeded the threshold of 50 cases per 100,000 inhabitants and its positive test rate of 5.70 percent has climbed above the French average of 4.2 percent.

Several smaller towns and cities in the region around Rouen have taken measures to impose masks in certain parts of their outdoor spaces to reduce spread of the virus.

France has not made any national rules on mask-wearing outdoors, but masks are mandatory inside public spaces and on public transport across the country.

Prime Minister Jean Castex previously urged local authorities to “extend as far as possible” the rules on wearing masks outside in order to curb the spread.