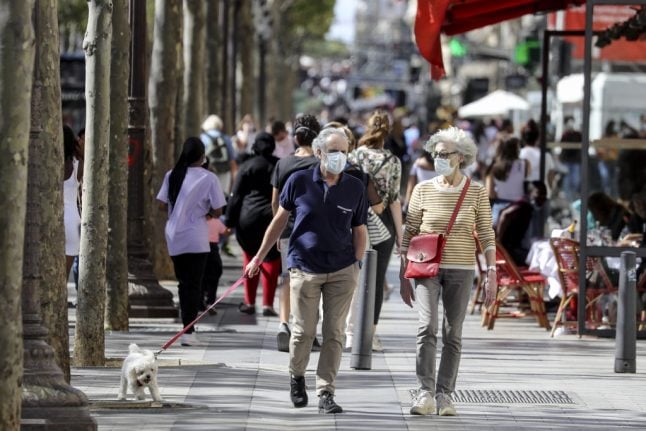 Since Friday, masks have been compulsory in all outdoor public spaces in Paris and its suburbs. Over the weekend, other major French cities such as Bordeaux, Strasbourg and Orléans followed suit, while Marseille, Nice and Toulouse had already done so.

Masks are already compulsory in all indoor public spaces in France and from Tuesday will be compulsory for anyone in a shared workspace, while pupils going back to secondary school will also be wearing them in the classroom.

From 8am on Friday, masks are compulsory in all outdoor public spaces in Paris and its suburbs, but do you agree with the new measures?

Following the poll that showed three quarters of French people support the idea of wearing masks outdoors, we headed out to speak to some people.

Florine Santoro, a 41-year-old stay at home mom, agrees with the new rule. “It’s fine for me,” she told The Local, “but I worry about my children because wearing a mask for them is complicated – one has asthma and I am afraid he might get sicker by wearing it”.

“For my kids, it is hard to understand that, after so many months without seeing their friends, they only get to see their eyes and play with them from afar”, said father-of-two and RATP employee, Mathieu.

If it might be easier for adults to grasp the idea, it is probably due to the threat of the €135 fine you can get if you are caught heading through the Parisian streets without a face protection – although there is now exception made for joggers and cyclists.

A free pass that 28-year-old graphic designer Iris does not use. The Local meet her while she was jogging along the Canal de l’Ourcq, with her mask on. “To me it is even more important to have it now because when we run, we tend to breathe heavily with our mouth wide open and at first it was compulsory,” she explains. Indeed, when the Préfecture de Police announced face-masks would become an obligation in the French capital last week, no exceptions existed. For many, it is complicated to understand what to do when the rules are regularly changing.

“Honestly I am lost regarding all the recent contradictions that were made around the mask”, confesses Mario Lawson, a young teaching assistant.

Désirée, 37 and unemployed, is also angry at the government, but for a different reason. “The mask is a good idea for rich people maybe, as everything is with Macron.”

“It’s inappropriate to leave us with the cost of the masks, as if we were responsible for Covid-19”, agrees André, a retired salesman.

“The State and the French taxpayers cannot finance masks for everyone all the time,” the French president declared in an interview for TF1 in late July. Since then, many politicians, particularly from opposing parties, have asked for the face-protections to become free.

Yet, according to father-of-two Mathieu, it is too easy to blame the government for everything: “They did great in managing a crisis that nobody could have predicted. It is easy to criticise but what would have people done in their situation?”

Disagreeing with how Emmanuel Macron and his ministers handled the situation is one thing, but refusing to wear a mask because you think it goes against your freedom of liberty is another.

For a few weeks now, anti-masks movements have appeared in various European cities. On Saturday, protests happened in Berlin, London and Paris. “I can understand because it’s a bit restraining to have it. We can’t smile or even wear lipstick and it is just getting sadder and sadder”, argues Marine, a 19-year-old student.

“To me it just seems like nowadays it is trendy to be against the government’s decisions”, disagrees her friend Alice.

For waiter Léo, this needs to be taken seriously. “They scare me. Ignorance is a powerful weapon and can be damaging, I hope there will be actions taken against them”.

During the protest in Paris 123 people were fined and one was arrested according to Le Parisien. But while the French are known for their protesting skills, the anti-mask demo only gathered around 200 people.