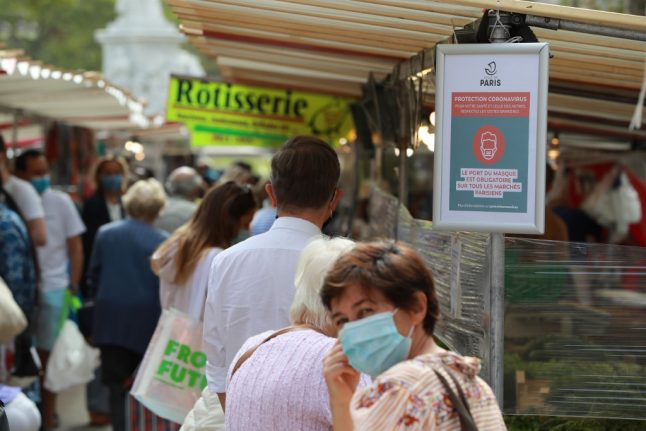 Coronavirus is back in large numbers across Europe. Since governments began to lift lockdowns at the start of the European summer, positive cases of COVID-19 have been steadily increasing in countries that previously had the spread of the disease under control, including Spain, France, Italy and Germany.

In recent days, France has recorded its highest daily tally of the new cases since the height of the pandemic in April, while Spain faces the continent’s most significant resurgence in infections.

In the UK, certain areas have been placed into local lockdowns to stem the spread of the virus, as schools begin to reopen across its four countries, though the government says rates remain flat outside the locked down hotspots.

Most epidemiologists are reluctant to call this rise in cases a “second wave”, arguing that it is too early to say what is happening. It appears that at least some of the rise is concentrated among younger people and asymptomatic cases, and we don’t yet know why death rates are not climbing at the same rates as positive diagnoses. Countries are not yet seeing hospitals or healthcare facilities overwhelmed, as they were at the start of the pandemic.

So how worried should Europeans be about this resurgence in infections? The Conversation asked experts in Spain, France and the UK what these numbers mean, and how health authorities should respond.

In France, since the start of the COVID-19 pandemic, 253,587 positive cases have been confirmed at the time of writing, causing the deaths of 30,544 people. At the end of February, the situation became epidemic, leading the government to decree general lockdown on March 17. This sweeping measure broke the chains of transmission, limiting the virus’s flow and “reset” the epidemic.

With the summer, positive cases have increased again: since mid-July, we have observed an increase in daily confirmed positive cases – 5,429 new cases were detected between August 25 and 26. 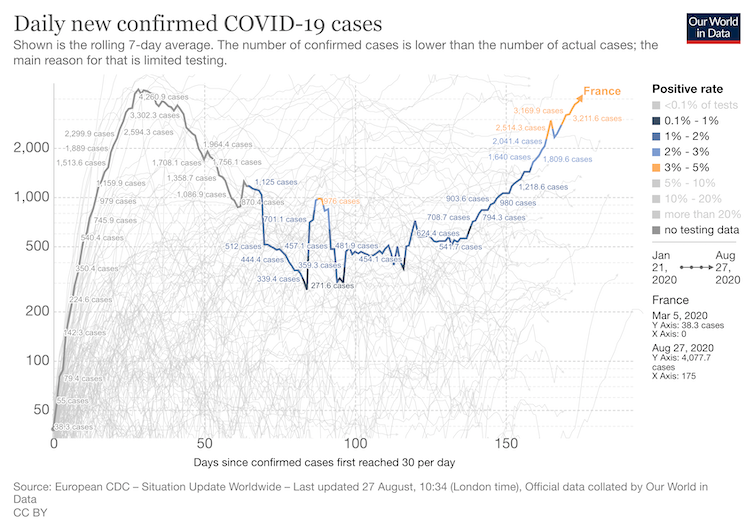 It doesn’t make much sense to compare these numbers with the numbers from March, because the situation is very different when it comes to testing. At the time, only patients with severe symptoms were screened, which is no longer the case. In spring, the number of actual cases was therefore much higher than those recorded. Especially since recent work showed that in May, only one in ten symptomatic cases was detected in France, due to a screening program that was too limited and too slow.

Though the situation has improved today, it is still difficult to know how much the epidemic is being underestimated. But one thing is certain: the number of cases is increasing more than the number of tests.

In France, since July 20, anyone aged 11 and over must wear a general public mask in closed public places, including in schools. The main problem is that this obligation mainly concerns places open to the public. Wearing a mask should be compulsory in all enclosed spaces, whatever they are, as long as they cannot be ventilated.

It should also be taken into account that the virus is spread by aerosol, in addition to large water droplets. The measurements will therefore differ depending on whether premises are air-conditioned or not, and if so, whether this is by recirculating air or by external air intake. Outside, the risk is probably lower, but preventive measures can still help to limit the spread of the virus, in particular by minimising how much we are touching our masks – for example, putting one on to enter a store, then removing it – which can also be a source of potential contamination.

One thing is certain: herd immunity, which would slow the circulation of the virus, will be very difficult to achieve. In a population where the virus circulates equally, it takes 60 to 70% of people to be infected and develop neutralising antibodies to reach herd immunity. Certainly, if the circulation is less homogeneous, as in the case of the coronavirus, which seems to circulate at “low noise” until a super-spreader event occurs, this rate may be lower.

It would be dangerous to let the virus circulate in certain groups, such as young people, in the hope of achieving herd immunity more quickly. Populations are not separated from one another: if the epidemic spreads in one group, others will be gradually affected, whether we like it or not.

This can be seen in what happened in Florida. For two to three weeks we saw the diagnosed cases increase, but mainly among young people. Hospitalisations and intensive care patients did not initially increase – these indicators do not start to move until three to six weeks later. If France also waits to take action, it will be too late, and we risk losing control of the epidemic.

While waiting for a real treatment or a vaccine, the only way to avoid a runaway epidemic is therefore to manage the circulation of the virus at an acceptable level, using widespread, rapid screening and monitoring of contacts, as well as respect for social distancing measures. This balance is not easy to maintain, but it is our only option for the months to come.

This article is republished from the The Conversation under Creative Commons licence.

For you: more from our Insights series: