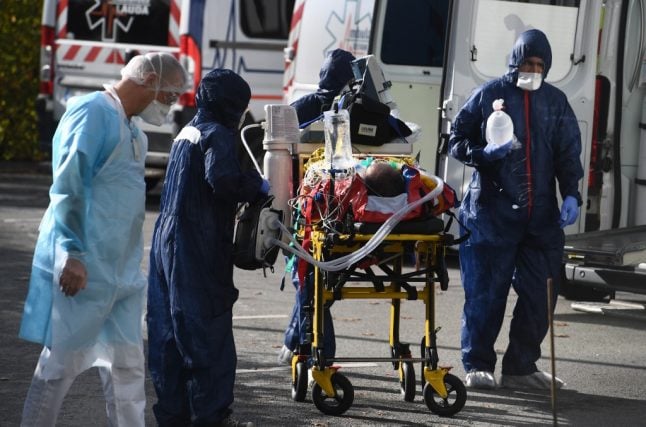 In this article we have picked some of the key numbers and put them into context to give you a better understanding of how the virus is developing in France.

Some of the numbers included came out on November 4th in public health agency Santé Publique France's daily update, while others came out in their latest weekly report, which analyses the development of the virus in detail, both on a national and local level.

The most recent report, which was published on October 29th, collected data until October 27th.

Here is a look at the latest key numbers.

385 – the number of deaths in hospitals caused by Covid-19 in the last 24 hours on Tuesday, November 4th. This number should be carefully interpreted due to occasional lags in hospitals reporting deaths. It tends to drop over the weekend and then spike in the beginning of the week.

Another 854 French Covid deaths reported tonight BUT this is NOT 854 deaths in 24hrs. Just over half are new hospital deaths today ( bad enough). The rest are care home deaths spread over several days. This is (all the same) the biggest reported total on one day since mid-April.

However the current death toll is much higher than it was one month ago. In early October the weekly average was around 55 deaths per day in hospitals. Currently the number has exceeded 300.

During the worst period this spring in early April, France recorded around 600 deaths per day. Hospitals worry the numbers will be higher this time around as the peak of the pandemic has yet to arrive.

France’s hospital numbers now resemble those registered just before the height of the pandemic in mid April. Last time, the peak came on April 4th (32,131 patients), when France had been in an even stricter lockdown than the current one since March 17th, so nearly three weeks. The current lockdown has lasted nearly one week, and hospitals warn that the peak of new patients will not arrive until one to two weeks from now.

4,080 – the total number of patients receiving intensive care treatment per November 4th, up from 1,335 one month ago, on October 4th, and 467 on September 4th.

France has 5,800 long-term intensive care beds and can, according to the health minister, increase the total capacity to 7,700 within 15 days “without major organisational effort”.

The government has stepped up transfers of patients between regions and has also sent some patients to Germany for treatment.

Hospitals want to avoid having to dedicate all their resources to Covid-19, which they did during the first wave of the virus, at the expense of other treatments. However, most have begun to reschedule and postpone other treatments.

For months, the clear trend has been a steep rise in case numbers which cannot be explained by France's increased testing rates alone.

392 – the “incidence rate”. On a national level, France registered 392 new positives per 100,000 inhabitants on average in the seven days preceding October 27th. The incidence rate has nearly quadrupled in one month, it was 104 in the last week of September.

The map below shows the incidence rate in each commune in France, dark blue signifying a rate above 250 (which is very high).

2,118,792 – the total number of tests done in the seven days preceding November 4th, up from around 1 million in September. France has radically increased its testing capacities since this spring, and recently incorporated antigen nasal swab tests which give results in 15-30 minutes into its strategy in order to reduce waiting times and delays in getting results back.

18.6% – the percentage of total tests that brought back a positive result, referred to as “positivity rate”, as of October 27th. The positivity rate has been rising steadily over the past months – it was 8.6 percent on October 5th and 1.8 percent in early August.

63% –  more than half the people who tested positive in the seven days leading up to October 27th presented symptoms. The rate of positive asymptomatic cases dropped after French authorities earlier this fall advised people against getting tested for Covid-19 unless they were an identified contact case or presented symptoms.

3,042 –  the number of clusters currently being investigated by health authorities per November 4th, 912 of which were in elderly nursing homes (EHPAD). These numbers, both the number of total clusters and those in EHPAD have been rapidly rising the past couple of months. Identifying clusters remains a crucial part of France's strategy of testing, tracing and isolating. Health authorities worry that the steep rise in the number of clusters in EHPAD will lead to more fatalities, like they did this spring.