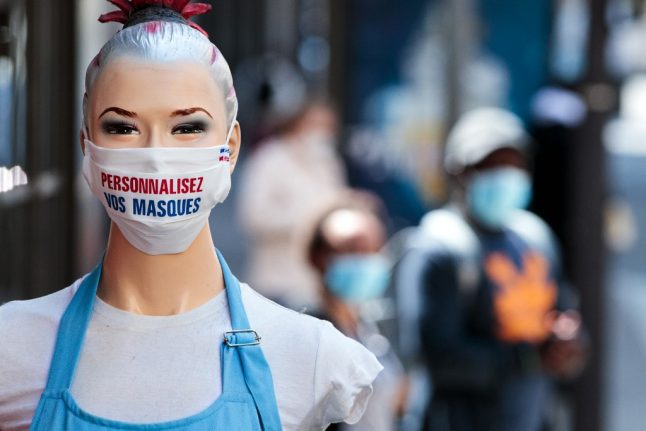 Prime Minister Jean Castex, in a press conference on Thursday morning, announced that the Paris police chief, after consultation with the mayor, “will expand mask wearing throughout the capital”.

Paris and its suburbs had already made masks compulsory in many of the busiest streets, but this expands the rule to all public outdoor spaces. Wearing masks in indoor public spaces such as shops and public transport is already compulsory throughout France.

The rules apply to all those outdoors in streets and other public space and failure to comply could lead to a €135 fine. Motorists in cars are not included but scooter riders are.

After initially saying that joggers and cyclists would have to wear masks, the Paris préfecture de police on Friday morning issued a statement saying that they would not.

A statement from Paris police and local authorities explained the measure saying: “The deterioration of the health situation, with an active circulation of the virus in the Paris region, which is accelerating has prompted (authorities) to take this firm measure in the general interest.”

Clarifying some points of the restrictions to FrancoInfo, Paris' deputy mayor with responsibility for health Anne Souyris said that removing the mask in an open space to smoke or eat was not allowed – effectively outlawing smoking in the street.

This echoes the rules for cafés and bars, where patrons remove the mask when they are seated but put it back on when they stand up to either enter or exit the café or go to the toilet or bar.

As with France's other mask rules, children under the age of 11 are exempt.

In Paris the move, which was announced suddenly and took many by surprise, had a mixed reaction.

“It is already difficult to breathe! On public transport I can understand, but I do not think that the virus wanders around in the air like that”, said Marietha Adhot, smoking a cigarette while leaning against a wall.

Sylvie Soufir however argued that the government “should have done it a long time ago”.

“I think they waited until summer had passed, perhaps to let tourists and people spend,” she said.

Paris follows in the footsteps of Nice, Toulouse and Marseille which have already made masks compulsory in all outdoor spaces.

Castex told journalists: “The virus is gaining in strength, and this is the moment to intervene” and also announced 21 'red zones' of France where infection levels are highest.

Across France in the last two weeks there have been 300,000 police stops of people not wearing masks and 70,000 fines issued.