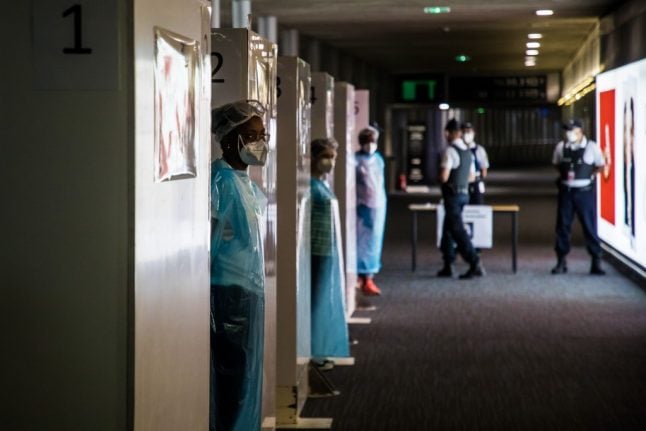 For the first time, French health authorities have published details on the frequency of spread inside different kinds of workplaces. Photo: AFP

A rapid surge in the number of confirmed new coronavirus cases over the past weeks in France has seen the government intensify efforts to halt the spread, but President Emmanuel Macron has ruled out a new nationwide lockdown.

“Testing, tracing, isolating, organising our emergencies, preventing, standardising the wearing of masks when necessary,” would be the tactics, Macron told Paris Match in an interview.

France has bolstered its testing programme since the pandemic hit with full force in March – the latest public health data showed the country has reached a level of 700,000 PCR (q-tip) tests a week – and extensive testing has become the cornerstone in a strategy to quickly trace and break up transmission chains.

When “at least three coronavirus cases are confirmed or likely in a period of seven days,” national health agency Santé Publique France defines it as a 'cluster'.

Most clusters in workplaces

Workplaces continue to be the main source for clusters according to the newest data published by Santé Publique France.

Thirty-two percent (88) of the 272 clusters currently under investigation were traced back to the workplace, the report said. Of the total 892 clusters identified in France since the beginning of the pandemic, 26 percent (892) originated in the workplace.

Only 1 percent of the clusters currently under investigation originated on public transport (planes, boats or trains), while 12 percent originated in health establishments.

That workplaces continued to be the number one source of spread spelled trouble for this autumn, as August is traditionally one of the calmest months in France, with cities like Paris much quieter than usual as residents go away on holiday.

Workplace is however a broad term, which has led to some confusion as to where the danger lies – are open-plan offices the main culprit or do the workplace clusters mostly originate in factories or slaughterhouses? – and what measures authorities and businesses should take to reduce the risk.

For the first time, Santé Publique France's report helped shed some light on these questions by providing details on the frequency of spread inside different kinds of workplaces.

Of 178 clusters identified on August 12th, nearly a third (51) originated in “public administration”, a term referring to all kinds of public offices in France, from policing to bureaucratic office jobs (although health workers were exempt from this category).

Within these, 20 originated in “public security activities”, 11 in “general public administration”, eight in “fire and rescue services”, seven in the defence sector, and the remaining five in “others”.

Twenty-eight of the 178 clusters found their source in the “manufacturing industry”, a category that spans across all kinds of factory work (food, industry, textile). Most of these (20) were however traced back to slaughterhouses, which early on were identified as a major source of Covid-19 transmission.

Hotel and restaurant businesses was the third most common source of spread and accounted for 16 of the total 178 clusters.

Sixty-nine clusters belonged to 14 “other sectors”, which were not identified, but were the source of at least eight clusters each.

Authorities worry that when schools reopen in September and people go back to work the situation could deteriorate further, and has taken measures to tighten health rules in the workplace before that time.

The virus is circulating much more actively today than it was a few weeks ago,” Labour Minister Elisabeth Borne said last week, as she declared that everyone working inside a shared workplace, as of September 1st, will have to wear a mask at all times.

READ ALSO: These are France's new rules on masks in workplaces

Borne also urged all businesses to encourage their employees to work from home if possible, especially in vulnerable areas with a high level of virus spread.