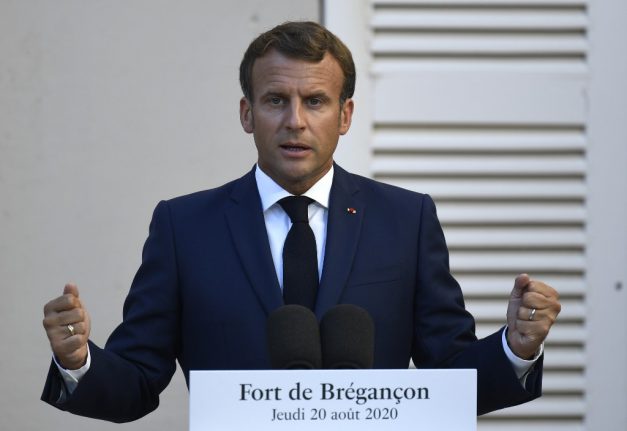 There are one or two challenges for the French government this autumn. Photo: AFP

In the context of the Covid-19 pandemic, holidays have been a little truncated this year, but Macron managed a few weeks at Brégançon – the holiday villa on the Riviera that all French presidents are entitled to use – although he did host some meetings down there including one with German chancellor Angela Merkel. Before heading off on his holidays, Macron held a dinner for his ministers at the Elysée where he reportedly told them: “La rentrée will be difficult, so please take a step back and rest.

“We are entering a complicated moment here. The coming weeks, and the autumn, will be very difficult.

“The health crisis is not behind us and socially it will be very tough.”

In contrast to September 2019, when Macron bounced back to work with a long list of things he wanted to push through, this year he really only has two things to focus on – but they're both biggies.

This is going to be topping most governments' agenda in the coming weeks, how to cope with the ongoing health crisis and prepare for the feared 'second wave' that some predict will hit in the autumn.

France's Defence Council meets on Tuesday and will be looking at some of the tricky issues around the pandemic.

Lockdown – with confirmed cases in France still rising rapidly – although death and hospitalisation rates for the moment remaining stable – the Council will need to look at preventative measures.

READ ALSO How serious is France's spike in Covid-19 cases?

A full nationwide lockdown has been ruled out by Macron himself, in an interview he gave to Paris Match from his holiday home.

However, authorities have long said that local lockdowns could be used if the health situation requires it and with six mainland départements now designated 'red zones' this could be under discussion.

READ ALSO What does it mean if my département is a 'red zone'?

Schools – French schools return on September 1st with a revised health protocol in place. However this has already been tweaked once after concerns from teaching unions so it's likely the Council will also be looking carefully at the protocol.

Macron has always been clear that he wants as little disruption to the school year as possible, regarding it as a major equality issue, but if September and October sees a rash of outbreaks in schools, the education minister has said the government could close down certain establishments. A chaotic return to school would see the government heavily criticised.

Second wave – this is the issue that will be preoccupying politicians around the globe – is their country headed for a 'second wave' of infections and will it be as bad, or worse, than the first? There is no settled consensus among the scientific community about a second wave, some experts say the virus will come back stronger and more deadly in the autumn, others say the virus could gradually weaken with time.

When French journalists asked the head of France's advisory Scientific Council Jean-François Delfraissy on Monday of which theory he supported, he simply said: “I don't know.”

France has in recent days reported a very big increase in reported cases from around 500 a day two weeks ago to nearly 5,000 on Sunday. Part of this has come from increased testing, but that cannot alone account for the increase in case numbers.

However the number of people in hospital with the virus continues to slowly but steadily decline and the death rate has not so far seen a spike.

Delfraissy said on Monday that he believes France is still in the first wave.

Masks – New rules have already been introduced around mask-wearing in the workplace, which come into force on September 1st, but the Council may also examine the national mask-wearing rules. At present the rule only makes masks mandatory in enclosed public spaces, but local authorities in around 400 communes have gone further and brought in rules around wearing masks in the street.

Quarantine – this probably isn't the top of the agenda but it's still important for anyone planning a trip between France and the UK. According to Europe Minister Clement Beaune, the Defence Council will also decide on what, if any, restrictions to impose on people arriving from the UK, in response to the UK's decision to quarantine people arriving from France. France's strict lockdown brought the virus under control, but had huge knock-on effects on the economy. France: AFP

And linked to the pandemic and ensuing lockdown is the forthcoming economic storm.

France is predicted to be on course for its worst recession since 1945, and although experts believe that the UK and Spain will be hit harder, that will be precious little consolation for Macron, who has built a large part of his reputation on his economic reforms and job-creation measures.

The government has been working on a €100 billion rescue plan which it hopes will kickstart the French economy again and which will be released at the beginning of September.

Among the issues to be examined are the bailouts for specific sectors such as the tourism industry and the ongoing furlough schemes and grants for self-employed people who are not able to resume their work fully.

There is a little glimmer of good news for Macron through, which is that in contrast to last year he's facing a lot less in the way of protests and opposition.

When the French government returned to work in September 2019 it faced strikes in schools and hospitals and fury from unions over proposed changes to pension rules (which eventually lead to almost two months of transport strikes in December and January) along with the much-diminished but still present 'yellow vest' protests.

Although when he looks at his task list for 2020, Macron might even be getting a bit nostalgic for the good old days when thousands of people gathered every Saturday to demand his resignation.