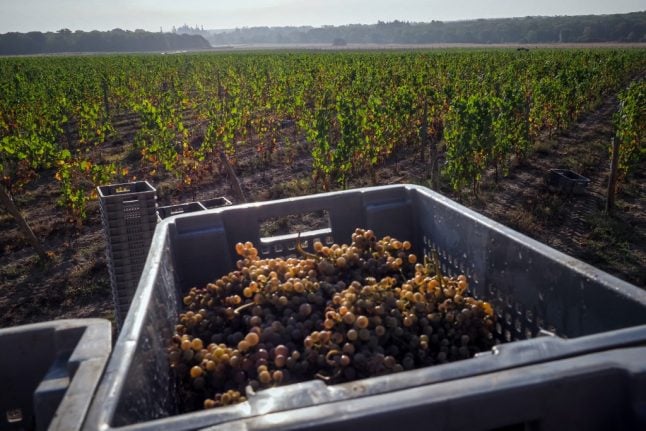 Traditionally French vineyards harvest their grapes are harvested in September, but increasing temperatures have changed that. All photos: AFP

Picking began over the weekend in the Beaujolais vineyards and thousands of pickers will be travelling to the area this week as the harvest – known as the vendange – gets underway, while wine producers in southern France began picking earlier in the month.

Traditionally the grapes are harvested in September, but climate change and steadily increasing temperatures has made August harvests more and more common. This year's is the earliest for the Beaujolais region since the heatwave of 2003, according to vineyard owner Jean-Marc Burgaud.

Although it is an important part of traditional French life, these days a lot of the picking is done by migrant workers, so the border closures during lockdown were a major headache for vineyard owners.

Fortunately France's borders have now reopened for travel from within Europe, but the owners must still bring in a strict health protocol for all their workers to abide by workplace Covid-19 regulations.

Burgaud told FranceInfo: “At the beginning of the epidemic I had a nightmare three nights in a row where I was in my vineyards with a superb harvest but nobody to pick and I couldn't pick my grapes.

“Everything else is ready. We have instructions for transport where everyone will have to be masked.

“In the vineyards there is only one of us per row, so there is naturally a distance between pickers.”

Many vineyard owners also provide housing for their temporary workforce, which this year also has to fit with the health protocols.

Fellow vineyard owner Emmanuel Fellot added that masks would be distributed to all his pickers.

But he is more concerned about the weather, saying: “All winemakers know that these excessive days of heat make us lose a lot.

“We are going to lose thousands of euros, whereas Covid is more of a worry – the worry of not getting sick.”

In southern France, scorching temperatures have forced some vineyard owners to begin picking at night.

Many in the south have reported a poor crop with small, shrivelled grapes that they fear will produce mediocre wine, but in Beaujolais they are more hopeful, saying that although the grapes are early, they are fully ripened.

Many French winemakers have been forced to turn unsold wines into hand sanitiser as sales collapsed during the lockdown.