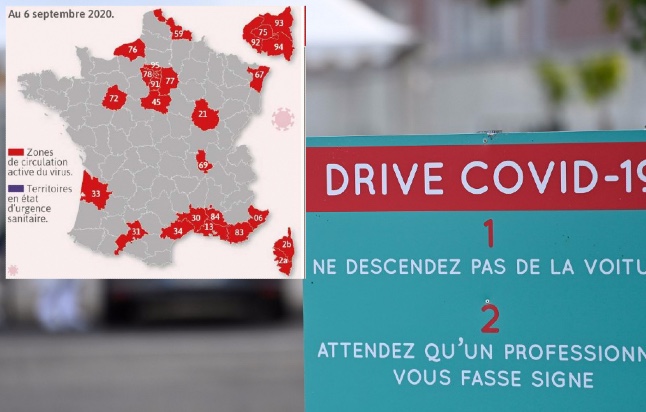 What changes for red départements in France. Photo: AFP

The first two départements to be bumped up to red level after the nationwide confinement were Paris and Bouches-du-Rhône in the south on August 14th. Others quickly followed suit.

A few weeks later and the list of red zones has grown to include a total of 42 départements, following weeks of rising coronavirus rates across France.

The virus is circulating more and more in France,” the French PM Jean Castex said on Friday September 11th when he announced the number of “red” départements had risen from 28 to 42.

To be categorised as a red zone, the health ministry looks at the number of new cases, but also other indicators such as hospital rates, positive test rates, the number of clusters, which are detailed in public health agency Santé Publique France's weekly reports.

Where are the red zones?

The current list of 42 red départements is as follows: The overseas départements of Guadeloupe, La Reunion and Martinique are also red zones.

Guyane and Mayotte are classed purple because they are still under a state of health emergency.

Why is it classed as a red zone?

It means that the area has a level of coronavirus spread that has surpassed the alert threshold set by health authorities of 50 positive cases per 100,000 inhabitants over the course of a week.

The figure is calculated on the number of positive PCR tests (nose swabs) recorded in the départment.

A département can also be labelled red if it has registered close to 50 new cases per 100,000 inhabitants for example if it is neighbouring a département with a high level of circulation, the health ministry said on their website.

While the red label is a sign of concern, the government stressed since they began to ease lockdown in May that the pandemic was still present on the territory and local areas would see a resurgence as life returned to normal.

By keeping a close eye on the development in each area they want to let local authorities take measures suited to their specific circumstances rather than only making blanket rules on a nationwide level.

So what does it mean for day-to-day life in those places?

When the French health ministry label a zone red, local authorities get extended powers to take measures to stem the spread in that area.

Among those powers are;

Health authorities can also decide to step up testing in these red zones as well as boost hospital resources if necessary.

And even when zones are not red…

However just because authorities can impose these restrictions doesn't mean that they will, or at least not all of them.

Although as of September 10th most local authorities had not made use of their powers with very few extra restrictions imposed in red départements.

In the départements of Nord bars were ordered to close at 12.30am and the same measure was taken in Marseille. There is speculation Paris will be the next to see bar closures but at the time of this update no action had been taken.