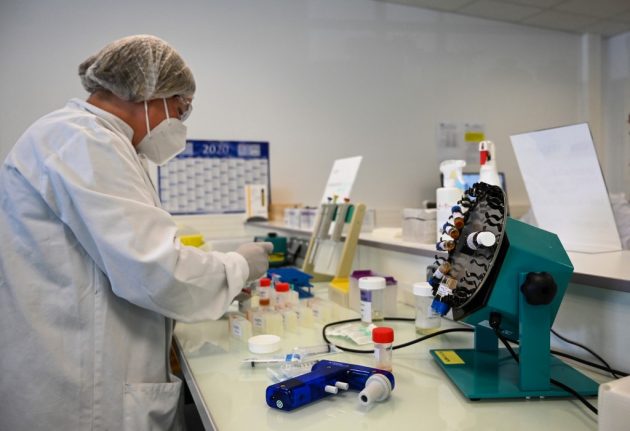 France has massively ramped up its testing capacity since the lockdown began to be eased in May and now around 600,000 people are being tested per week. Photo: AFP

On Thursday, France reported 4,771 new cases of Covid-19 – a big jump from the previous day and the continuation of a trend of rapidly rising case numbers over the last two weeks.

France is not alone in seeing a steady rise in cases as lockdown has released, with many countries recording totals equaling those seen in April and May.

Italy registered 845 new cases on Thursday, its highest daily tally since May, Germany and the UK have both been reporting daily totals of around 1,000 while Spain has been reporting an average of more than 4,000 cases a day for the last week.

So just how much of a concern is this? Testing facilities in France have been ramped up, with a lot more free walk-in test centres. Photo: AFP

Is it just because we are testing more?

France has massively ramped up its testing capacity since the lockdown began to be eased in May and now around 600,000 people are being tested per week. The creation of many new walk-in centres has meant that people can get themselves tested even if they have no symptoms, and millions of people took advantage of this before heading off on their holidays.

Of the new cases being recorded, around half have either no symptoms or very mild symptoms – so these are people who would simply not have shown up on in patient figures from March, April and May when testing was focused only on those seriously ill with the virus.

France's contact tracing programme is also up and running and many of the asymptomatic cases are those who were tested after being in contact with an infected person.

But while the extra testing has clearly influenced the numbers, it cannot alone account for the sharp rise in cases.

The number of tests performed has risen slightly over the last two weeks (from 589,000 tests to 632,000), but in that time the number of new cases reported daily has climbed from 1,000 to 4,000 and the percentage of people testing positive has risen to 3.3 percent.

Who are the new cases?

This has sparked a lot of talk of 'irresponsible' young people partying and forgetting basic health precautions.

While there has undoubtedly been some of this, the other thing we know is where clusters are centred.

There are currently 266 clusters under investigation, an increase of 33 in the past 24 hours, and the largest number of those are centred on the workplace – 32 percent, set against 28 percent for all types of social and family gathering.

Since the 15-44 age group are more likely to be at work than the over 75s, it seems that partying alone cannot account for all the new cases.

The workplace trend is particularly concerning since many French people are not currently in the workplace, instead taking the traditional August summer holiday and planning to return in September.

The labour ministry has made masks compulsory in all shared indoor work spaces from September 1st in an attempt to prevent a spike connected with la rentrée. The workplace remains the biggest source of clusters. Photo: AFP

Are hospitals filling up again?

Experts think this is probably connected to the profile of the new patients – the majority are younger people who are less likely to experience the severe form of the disease, although some people have also speculated that the virus itself is changing and becoming less severe.

The big concern is what happens if the younger patients begin to infect older people, who are more likely to become seriously ill and require hospital treatment.

The death rate too has remained relatively stable so far, with 12 deaths in hospital in the previous 24 hours and no death rate over 20 per day recorded in the last three weeks.

Looking back to the week in May which had the same number of confirmed cases, there were around 130 deaths every day, while the number of intensive care patients stood at 2,000.

The intensive care patients is a key figure, both for hospital capacity and for the likely future death toll. At the peak of the epidemic France had over 7,000 Covid-19 patients in intensive care, which put a massive strain on the healthcare system.

Are we headed back to lockdown?

This is probably the question on most people's lips as case numbers rise, but another national lockdown seems unlikely.

France's advisory Scientific Council has been saying since May that another nationwide lockdown is highly unlikely, and Emmanuel Macron underscored that message this week when he said that France 'cannot be put on hold' as the collateral damage from another lockdown would be too great.

What could happen, however, is local lockdowns in places where the virus is spiking.

Local authorities have all been instructed to draw up plans for their areas to be used if necessary and six départements in mainland France have now been designated 'red zones' with more than 50 new cases per 100,000 people. This designation gives local authorities enhanced powers to enforce restrictions including closing businesses, restricting movement of people or imposing a travel ban such as the 100km rule that France enforced in May.