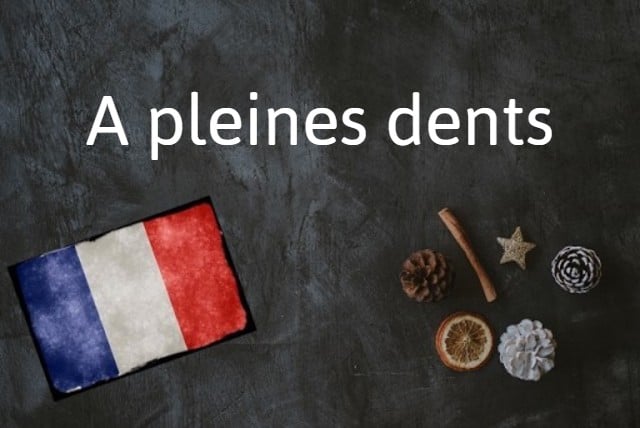 Why do I need to know?

Because, if someone shouts 'full tooth', you will know that they aren't talking about biting.

A pleine dent means 'full tooth' and the plural version à pleines dents means 'full teeth' or 'all your teeth'.

Both are commonly used in French, but rarely as a literal referral to teeth. The 'teeth' here are actually metaphors for life.

Going at something 'with all your teeth' in France is equivalent to doing something 'at full speed' in English, 'giving it all you have'.

A pleines dents comes from the expression croquer la vie à pleines dents, which translates to 'biting into life with all your teeth'.

Today, croquer la vie à pleines dents is like saying 'live life to the fullest' (YOLO if you will).

Funnily enough, A pleines dents ! is also the name of a food documentary series featuring famous French actor Gérard Depardieu, who together with a French chef trots around the world on a culinary excursion. The show screened on Arte in 2015 over two seasons.

Il faut y aller à pleines dents je t'ai dit ! – I told you that you need to give it all you've got!

Il faut apprendre croquer la vie à pleines dents. – You need to learn how to live life to the max.