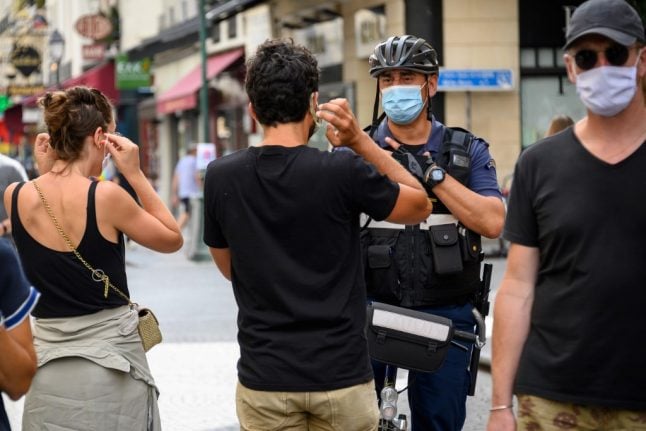 Police in one of Paris' compulsory mask zones ask pedestrians to put on their masks. Photo: AFP

The spike in new cases marked the first jump of more than 4,000 in a day since May, although the number of new patients hospitalised at 149 was down on 162 for Wednesday, the DGS public health directorate said.

France has logged 18,638 positive virus cases over the past week while the percentage of positive tests has been rising, to 3.3 percent Thursday from 3.1 on Wednesday with the DSG revealing 33 new clusters.

France has in recent weeks massively stepped up its testing programme, but public health officials say that extra testing alone cannot account for the rise in cases.

The country has logged 30,480 deaths during the pandemic to date — 12 since Tuesday and metropolitan France continues to see a “worrying” upward transmission trend, the DGS said with new confirmed cases up 43 percent in a week on last week while the number of hospitalised patients on a ventilator is also on the rise.

Six départments, including Paris and the Marseille area, show more than 50 cases per 100,000 residents, above the alert level with another 24 just below.

Despite the rise, president Emmanuel Macron says that France 'cannot be put on hold' as the collateral damage from another nationwide lockdown would be too great.

Instead local authorities are preparing their own plan for extra restrictions on a local basis if necessary.

In recent days rules on mask-wearing have also been tightened up, with many towns making them compulsory on the street while they will be mandatory in all indoor work spaces from September 1st.