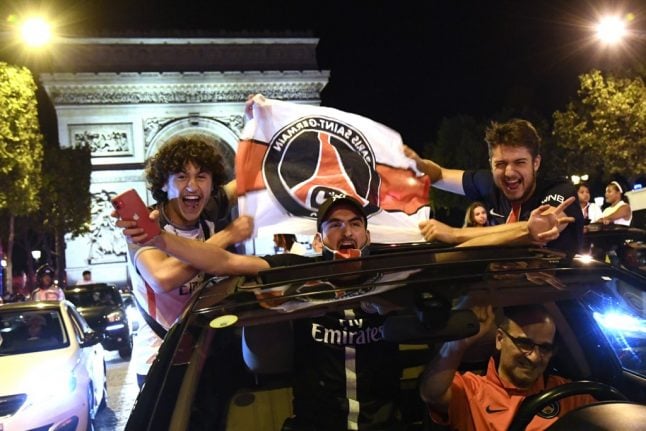 PSG supporters celebrated on the Champs Elysée Avenue after their team's 3-0 win over RB Leipzig, during the 2020 Champions League semi-finalplayed in Lisbon. Photo: AFP

French football fans will be holding their breath as PSG take on Bayern in Lisbon on Sunday, in a Champions League final that could see a French team win the prestigious cup for the first time since 1993.

It is also the first time the PSG has made it to the final, yet fans will have to watch the game from their homes or a bar, as the mayor's office has said no to fanzones in the city.

“All I see is an massive Covid-19 cluster,” Paris health official Anne Souyris said of a potential fanzone.

The PSG's Champions League successes have coincided with several departments in the Île-de-France region around Paris passing the “alert threshold” of 50 new daily coronavirus cases per 100,000 inhabitants.

Souyris told AFP she recommended gatherings in small groups of 10 or less in cafés where social distancing is possible, to prevent the game night from causing the number of new coronavirus cases in the capital to spike further.

“It's not thought out and it doesn't make any sense from a health point of view,” Souyris said.

PSG had planned a live transmission of the game for 5,000 spectators at its Parc des Princes ground, which is the upper limit of people allowed in a gathering.

“If we do that at the stadium, we risk having groupings we won't be able to manage,” Souyris said.

Following PSG's semi-final victory on Tuesday, French police arrested 36 people including three minors after clashes on the Champs-Elysées and around PSG's home ground of the Parc des Princes, in the west of the capital.

Thousands of PSG fans, often young and for the most part not wearing masks in line with coronavirus health and safety protocols, paraded down the Champs-Elysées in cars, and on mopeds and scooters, in a cacophony of horn-blowing and chanting.

“The judicial system will be vigilant and the Paris prosecutor's office will bring the perpetrators of these acts of violence on the Champs Elysées,” he wrote in a tweet.