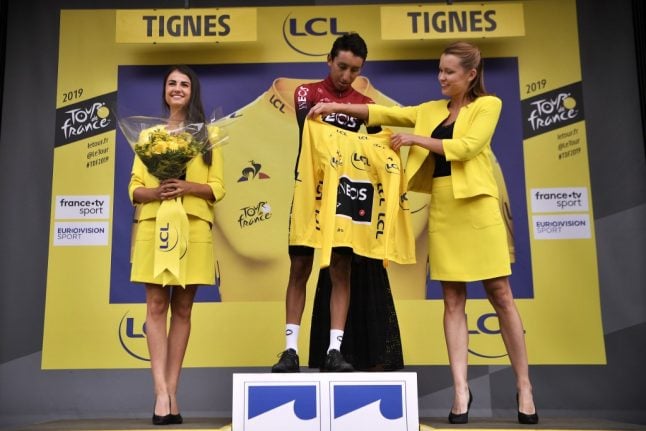 Last years Tour de France winner may have been the last to be flanked by two young women during the awards ceremony. Photo: AFP

Instead of two young women, Tour de France 2020 will feature one woman and a male host.

“Yes, it's new but we have already been doing it in other races for 20 years like in Liege-Bastogne-Liege,” said race director, Christian Prudhomme on Wednesday.

Bringing up attractive young women on sports podiums is an old tradition that has been subject to mounting criticism over the past years for being outdated and sexist.

In 2018, Formula One put an end to 'grid girls' who had been ever-presents at the start of grands prix in the world championship.

Last year, a petition containing nearly 38,000 signatures objected to the use of podium girls on the Tour de France with activists protesting “women are not objects nor rewards”.

Prudhomme did not say whether or not the tradition of each host/hostess giving the cyclists a kiss would continue, although the coronavirus pandemic has seen organisers clamp down on traditions that were considered unsanitary under the current circumstances.

Health concerns remain paramount ahead of the Tour, which was long feared cancelled before it was pushed back from the traditional July slot to August 29th. After a debate on whether the race should go ahead without a public, organisers got the green light from the sports ministry to let spectators in as long as they strengthened preventive health measures to keep Covid-19 at bay.

On Wednesday, organisers announced a batch of health measures to try and prevent the race from turning into a coronavirus cluster – a worst-case scenario for the organisers.

“Common sense indicates that you have to wear a mask, even if the formal obligation is to do so,” Prudhomme said, asking everyone who intended to see the race to put on a protective face-mask.

Wearing a mask in public has been made compulsory in an continuously expanding list of towns and cities in France.

READ ALSO: Where in France is it compulsory to wear a mask in the street?

In the countryside where there are no such rules in place, the situation is more complicated, and cyclists have expressed concern about the lack of mask-wearing several times this summer.

“People do not realise that, when they shout encouragements at a 40 centimetres distance, there is a risk,” said rider Julien Bernard of the Trek team.

Despite the lack of a nationwide rule on wearing masks outside in France, Health Minister Olivier Véran has urged the French to wear masks in any open-air areas where keeping a 1 metre distance is difficult.

This presents another major problem for the Tour, which traditionally gathers thousands of people and massive crowds especially during the opening and closing ceremonies.

The number of spectators present at the presentation of the teams on August 27th in Nice will be limited to 1,750 seats, a figure that could be changed depending on the evolution of the health crisis in the days to come, the organisers said.

Nice on Thursday extended its rules on compulsory mask-wearing to the entire city.

In addition to requesting the public to wear a mask and limiting the number of spectators, organisers have set up a “Covid cell” of 15 people, who will be on duty throughout the competition and cooperate with regional health agencies.

They will also set up a mobile screening laboratory that will follow the race and provide Covid tests “with results known within two hours maximum”, according to the organisers.

The cyclists will be tested twice before the start of the race as well as on every rest day.

Media will not be able to access the team bus parking lots, and the total number of people present at the Tour (organisers, cyclists, event managers ect), which usually is around 5,000 in total, will be reduced around 3,000.

The public will likely be prohibited from taking selfies with the cyclists.