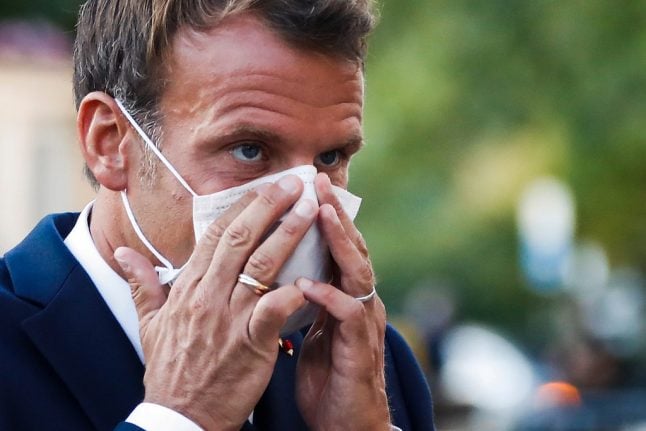 While at the presidential holiday home in Brégançon on the French Riviera, Macron gave an interview to magazine Paris Match – complete with traditional 'at home' style photos of himself and his wife Brigitte in their holiday attire.

And he told the Paris Match journalist: “We can't shut the country down because the collateral damage of lockdown is considerable.

“Zero risk never exists in any society. We must respond to this anxiety without falling into the doctrine of zero risk.”

France enforced one of the strictest lockdowns in Europe from mid March to mid May, with people confined to their homes, businesses shut down and travel heavily restricted. This lead to a massive contraction of the economy and set France on course for its worst recession since 1945 – although current projections show that the Spanish and UK economies were hit much harder.

Macron said he understands the “legitimate anxiety, linked to the virus” but said he believed that the public health policy of “testing, tracing, isolating, organising our emergencies, preventing, generalising the wearing of masks when necessary” should make it possible to contain the epidemic.

France has seen rapidly rising numbers of cases in recent weeks, with Wednesday seeing 3,800 new infections reported, the highest numbers since May.

The country has massively expanded its testing programme since May, but health authorities say that increased testing alone cannot account for the increase in the number of cases.

So far, rates of hospitalisation, intensive care patients and death rates remain stable. Public health officials say that they largest group of people testing positive is young people who tend to have milder symptoms, but the fear is that they will then spread it to older people and death rates will begin to rise again.

Many French cities are extremely quiet at present as French people take their traditional August holidays, and there is also concern around the return to workplaces and schools at the start of September.

France's advisory Scientific Council has previously said that the country will not return to a national lockdown, but there could be local lockdowns if necessary.

Prime Minister Jean Castex has asked each local préfecture to come up with its own plan for restrictions to impose if it becomes necessary in their area, and authorities in Paris, Sarthe and the Marseille département of Bouches-du-Rhône have been given extra powers after their areas were declared 'red zones' because of the high levels on infection.

Around 400 local authorities in France have already brought in rules around mask wearing in the street while wearing a mask will be compulsory in indoor workplaces from September 1st.

READ ALSO: Where in France is it compulsory to wear a mask in the street?