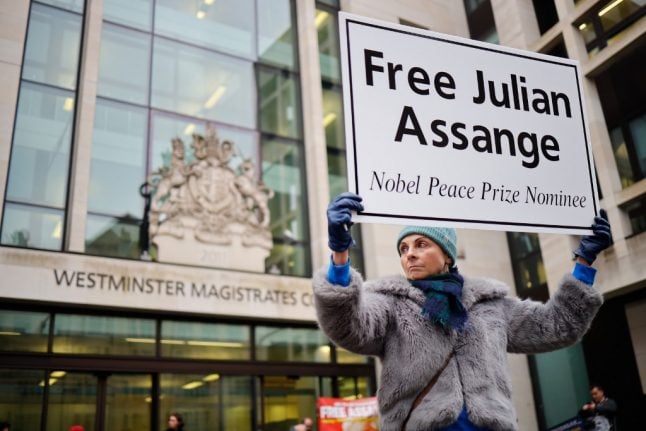 Julian Assange is currently in the UK but wants to be granted asylum in France. Photo: AFP

He probably needs no introduction, but Julian Assange is the Australian founder of the WikiLeaks whistleblower site that has been behind some of the biggest news stories of the last decade.

He is now in prison in the UK, facing extradition to the USA, after spending seven years in the Ecuadorian embassy to avoid extradition proceedings to both the USA and Sweden, where he was the subject of a rape allegation.

He is wanted by Washington over the 2010 release of hundreds of thousands of secret US military and diplomatic documents on the Iraq and Afghan wars, revealing civilian deaths as well as torture and clandestine military operations. Julian Assange in London before his time in the Ecuadorian Embassy. Photo: AFP

So what's all this got to do with France?

He would like to get political asylum here. He says he is encouraged by France's record on whistleblowers and he also apparently has a French wife and child.

Why is he in the news today?

Back when he was representing Assange, Dupond-Moretti called on president Emmanuel Macron to grant him asylum, saying: “The 175 years of prison that he is promised in the United States is an unworthy and unbearable sentence that is contrary to the idea that we can all have of human rights.”

Now the group that is supporting Assange, Robin des Lois (Legal Robin, a play on Robin des Bois or Robin Hood) says: “We are asking for an appointment with Eric Dupond-Moretti to ask him to relaunch the asylum request to President Emmanuel Macron, a request that he made loud and clear in February when he became Julian Assange's lawyer.” So does this mean he's as good as in?

No, there are several stumbling blocks.

The first is around the formal process of applying for asylum.

Back in 2015 Assange wrote an open letter in Le Monde, asking to be granted asylum. But as anyone who has ever tried to do admin tasks in France will know, open letters in newspapers are not the same as following the correct bureaucratic process (and are an option not available to the many asylum seekers in France who have fled conflict zones and who often find themselves living in grim shanty towns while they struggle to get their applications processed).

The second is that, whatever Dupond-Moretti might feel about his former client, asylum applications are not decided by the justice minister.

“The proposal to meet Robin des Lois will be studied and a response will be made to them accordingly,” said a spokesman for the ministry. However, she added, “the Keeper of the Seals cannot interfere in asylum procedures which are the responsibility of an independent body, Ofpra [the French Office for the Protection of Refugees and Stateless Persons.]”

A hearing will take place in London on September 7th to examine an extradition request by the US Justice Department, which seeks to put Assange on trial for leaking the documents. Assange is in jail in the UK, having previously been denied bail because he was judged to be a flight risk. He risks a jail sentence of 175 years in the USA if convicted.

Macron has so far not commented on the request to come to France.