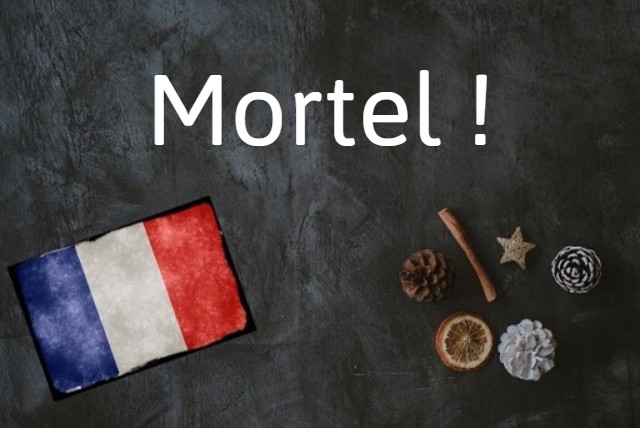 Why do I need to know mortel?

Because it's an expression with very different meanings depending on the context and you don't want to confuse them.

Mortel means mortal, as in nous sommes tous mortels – we're all mortal – means the opposite of being immortel – immortal.

It can also mean fatal or deadly, such as un accident mortel sur l'autoroute – a fatal accident on the motorway.

But if used as an exclamation, mortel can be a way of saying that something is 'really cool' or simply 'amazing'.

C'était comment le concert ? C'était vraiment mortel ! – How was the concert? It was really amazing!

On mange des pizzas ce soir ? Mortel ! – Shall we have pizzas tonight? Awesome!

There is an English equivalent but it's far more common in Ireland than elsewhere in the anglophone world, so a younger Irish person might say 'you're looking deadly tonight' if someone is looking really good.

Be aware of this..

Mortel as in 'awesome' is however an expression mostly used by young people and it's pretty slangy.

If you're talking to an older French person who tells you something was mortel – especially if they don't sound very enthusiastic  – chances are they are meaning the very opposite.

Mortel can be used to state something is ennuyeux à mort – 'dead boring'.

C'etait un diner mortel. – It was a deadly boring dinner.