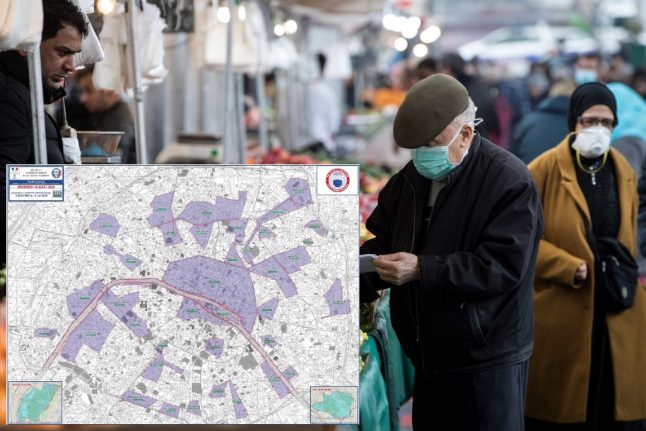 The previous mask rule has been widely criticised for being overcomplicated. Photo: AFP

The city of Paris was declared a 'red zone' on Friday as the number of new cases of Covid-19 being reported topped 50 per 100,000 people.

The designation gives local authorities in Paris extra powers to bring in new restrictions if they feel it necessary. The département of Bouches-du-Rhône, which contains Marseille, was also designated a red zone.

Now the Paris Préfecture de Police has announced extra checks, as well as new mask rules intended to simplify the rules on wearing masks outdoors, which had been widely criticised for being over-complicated.

Paris from August 10th has made wearing face masks compulsory in certain outdoor areas, in addition to the national rule that masks must be worn in all indoor public spaces.

However the Paris rule was restricted to busy areas only, and authorities released a list of 102 streets and parts of streets that it appeared residents were expected to learn.

After widespread complaints at the complication of the rules, the city has now attempted to simplify them by making masks compulsory in certain zones, including the city centre, the banks of the Seine and the Canal Saint-Martin, the Bassin and Parc de la Villette and the Bois de Vincennes and Bois de Boulogne.

The new rule is in force from Saturday at 8am. Failure to comply with the rule attracts a €135 fine, but police say in the initial days they will be concentrating on educating people about the new rules before they begin issuing fines. The police have also clarified that the mask rules apply to joggers and all those 'practising a sporting activity' in those areas as well as pedestrians.

Outside the listed areas, the wearing of a mask is recommended if social distancing is not possible.

“If the epidemiological situation were to deteriorate again, the wearing of masks could become mandatory throughout the capital,” the police statement added.

Police say they will be stepping up patrols at spaces open to the public “particularly bars, restaurants and their terraces, some of which generate large numbers of people in the evening and are sometimes accompanied by a relaxation of the respect of barrier measures”.

Paris' bars and cafés are now fully open but with hygiene measures in place such as compulsory masks unless you are seated at the table and restrictions on counter service. In practice it has varied how strictly owners enforce the rules, but police say they will now be making checks to ensure compliance.

Gatherings of more than 10 people will be allowed to continue for the moment – the current restrictions on gathering sizes is 5,000 – but could be banned again if compliance with barrier measures cannot be guaranteed, the police announced.

Wearing a mask on all forms of public transport has been compulsory across France since May, but police in Paris say they will be stepping up enforcement of this with extra patrols in the Metro, buses and trams of the capital.

The capital has been designated a 'red zone' because of the rapidly rising number of cases of Covid-19, although at present deaths remain low.

According to the Préfecture de Police, 600 new cases are reported every day in the Île-de-France region, of which 260 are in Paris. The percentage of tests coming back positive in Paris now stands at 4.14 percent – against a national average of 2.4 percent and 3.6 percent in the greater Paris region.

The number of new cases is growing rapidly and now stands at 51 per 100,000 people, a sharp rise from 37 the previous week and 8 at the start of the month. Although the group with the largest number of positive tests is the 15-45 age group, there are also high levels in the 45-65 group, the préfecture added.

For the moment the red designation remains limited to the city of Paris and not the surrounding suburbs.