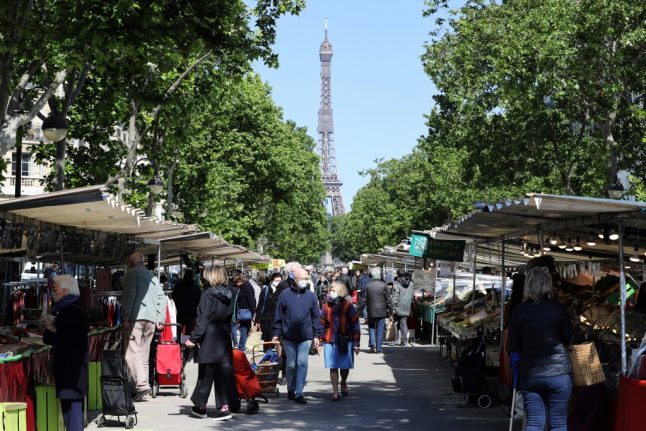 A decree in the government's Journal Official added the French capital and the Bouches-du-Rhône département –  Marseille and the surrounding area – to a list of areas in France qualified as especially vulnerable because of their “active circulation of the virus.”

“We are observing two départements of particular risk.. Paris and Marseille,” said Director general of Health Jérôme Salomon in an interview with France Inter on Friday.

The areas on the highest level of alert – those recording more than 50 new cases per 100,000 people – only mentions Paris the capital, not the surrounding suburbs or the wider Île-de-France region.

In such “active zones” on the highest level of alert, local préfectures may take restrictive measures to limit the spread of the virus, according to a law from July 9th.

The law lists rules to “prohibit the movement of people and vehicles, as well as access to collective transport” as examples of such measures, along with “regulating access to meeting places and establishments open to the public.”

Health Minister Olivier Véran on Wednesday clarified that this could include closing areas such as markets, restaurants and bars. He also hinted that Marseille and Paris could be bumped up to a higher level of alert in the coming days, following a spike in the number of new cases in the cities.

IN NUMBERS: How worried should we be about the rise of Covid-19 cases in France?

Neither Paris nor Marseille have so far announced any of the extra measures mentioned above, although Marseille's largest library closed on Wednesday after a coronavirus case was traced back to the premises. Authorities asked the more than 3,000 people who had been to the library to get tested.

Health authorities in Paris have discovered 21 new active coronavirus clusters in the capital.

Both Paris and Marseille are on the increasingly long list of cities with rules on compulsory mask-wearing on the streets, on top of the nationwide rule on face-masks inside public spaces.

Salomon said the reasons for the spike in the number of new coronavirus cases in Paris and Marseille were “logical”.

“These are densely populated urban zones with high flows of people, a lot of (means of) transport and young people with an intense social activity,” he said.

France has seen the number of new coronavirus cases in France steadily increase over the past weeks. Health authorities on Thursday reported 2,669 new positive cases in 24 hours – beating Wednesday's record as the highest daily tally registered since May.

France has ramped up testing programme over the past months, currently testing over 600,000 people per week (up from roughly  200,000 at the end of May), but health authorities say the increased testing alone cannot account for the rise.

Young people represented the largest chunk of the new cases, the national health agency said in their weekly statement published on Thursday.

Twenty-one départements were on Friday classified as in a situation of 'heightened vulnerability', either 'moderate' or 'high', according to Santé Publique France.

The health agency said “almost a third of (France's) départements exceed the threshold of 10 per 100,000 inhabitants,” the limit set for an area to be considered as of concern, “particularly in Ile-de-France and Provence-Alpes-Côte d´Azur.”

“Several départements in these two regions have sharply increasing rates and are approaching the alert threshold (50/100 000),” they wrote.