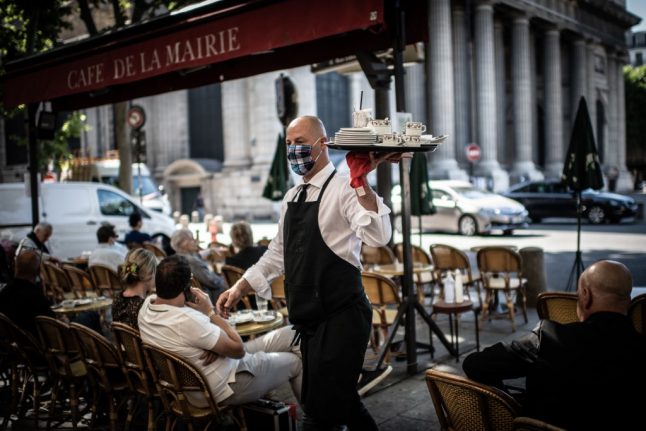 You will notice some changes, but many things in France are open as usual. Photo: AFP

Countries around the world vary widely in how they are dealing with the Covid-19 pandemic, so if you are travelling to France on holiday, you are likely to notice some differences from your home country.

Here's what to expect if you travel to France

READ ALSO MAP Where in France is it compulsory to wear a mask in the street? Masks are compulsory in the street in some areas. Photo: AFP

This is probably the most immediately obvious change you will see from the pre-Covid France.

There are quite a lot of places where masks are now compulsory and not following the rules could land you with a €135 fine. Masks must be worn in all indoor public spaces and on all public transport (including taxis).

On top of this many local authorities have imposed extra rules around wearing masks in the streets. We have a map of areas with on-street mask rules, but the list is growing rapidly so it's best to check the local authority where you are going.

Paris and its surrounding suburbs have their own rules for masks in the open air, here is our guide to the frankly pretty confusing rules.

And other private businesses and tourist attractions are within their rights to require you to wear a mask too, so always look out for the port du masque obligatoire (mask-wearing is compulsory) sign.

The distinctive French double (or treble or quadruple, depending on where you are) cheek kiss is in danger of dying out after the government ruled it unhygienic and instructed people to stop doing it.

This French public health ad (stay safely distanced this summer) has some fun with the fact that even French people don't always know whether its 2, 3 or 4 kisses depending on where you are #labise https://t.co/HmExx5tmWT

How widely people actually comply with this rule varies from place to place, but the government advice is no handshakes and no kisses, so you might have to make do with an awkward elbow bump instead.

Just because international tourism is down don't assume that holiday resorts are empty and you won't need to book ahead. In fact coastal resorts and rural retreats are fuller than ever this year as French people who might otherwise have gone abroad choose a holiday in France instead.

Many people who left it to the last minute are reporting great difficulty in getting reservations for hotels, gîtes or campsites.

French cities tend to empty out in August as workers take their summer holiday and head off to the coast or the country.

But in Paris they are generally replaced by the millions of foreign tourists who visit the city every summer. Their numbers are significantly down this year so if you have a special Paris site that you've always wanted to visit but were put off by the queues, then now is the time to go.

Off to the @MuseeLouvre today to take advantage of the museum at this quieter, socially-distanced time. Can't wait! https://t.co/qNGqIW7mSD

As well as the things that have changed, there are plenty of things functioning normally or nearly normally.

Bars and cafés are open throughout the country and although you will notice some extra hygiene rules – and masks should be worn until you are seated at your table – in general things are operating as normal. In most places they are pretty busy too, especially on the terraces where people can take advantage of the open air.

Transport is also largely functioning as normal, although many airlines have not resumed a full timetable.

Masks are compulsory on all forms of public transport and inside station, ports and airports. If you are flying into France you will be offered a Covid-19 test, but it is not mandatory unless you are travelling from one of these 16 'high risk' countries. As we mentioned above, some local authorities have extra mask rules and others have introduced extra regulations such as beach closures or bar limitations. These are likely to increase in the coming days as the French Prime Minister wants each local authority to develop their own plan, adapted to local circumstances.

In many places, particularly resorts, you will see walk-in Covid-19 testing centres set up. These are generally free and you don't need to be registered in the French healthcare system to access them, in fact authorities are keen to encourage tourists to get tested.

France is a country that likes a rule and in addition to the national and local rules many businesses have imposed their own restrictions including compulsory hand gel on entry or one-way systems around buildings.

These don't always seem to make a whole lot of sense (like a certain transport company limiting wifi access on board) but it's probably easier to just go with that you're told.

It's probably the biggest worry for tourists – if they come will they get caught by a new lockdown or a change to the travel rules?

Unfortunately we cannot predict the future, but what we can say is that when France introduced its last lockdown, tourists were allowed to go home and were not expected to stay in France indefinitely.

In terms of travel rules some countries, including the UK and Norway, have been reinstating quarantines with little notice, but France is not at this stage talking about bringing in any of its own. We will be keeping up with the latest on international travel rules here.

READ ALSO What are your rights if quarantines or travel bans disrupts your plans?