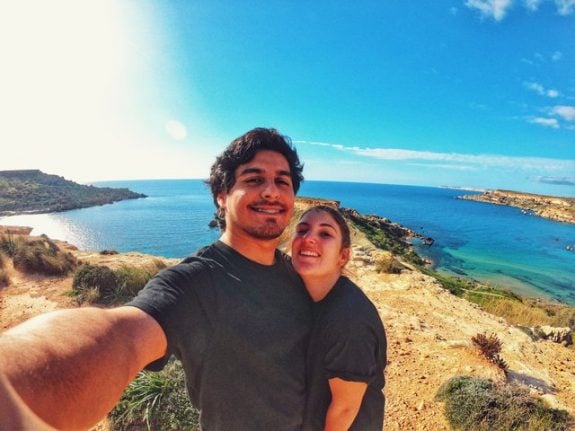 Benjamín is from Chile and Chloé from France. They are hoping to reunite soon in France. "I love her name because it doesn't have a direct translation to Spanish. Her name is unique," Benjamín said. P

Every evening, Benjamín sets his alarm clock in Chile for 6am to wake up at the same time as his girlfriend Chloé on the other side of the Atlantic in France.

“There is a six hours time difference between us, so she goes to bed a bit late and I early. She wakes up late and I early. Like this we're on the same 'time',” Benjamín, 24, told The Local.
For months, the two young students have synced their rhythms to reduce the distance between them, spending their days apart but together, doing the same things at the same time.

They met in Malta a year ago when they were both learning English. They fell in love – “madly” – and decided that they would be together starting in May or June 2020.

“Then coronavirus happened and here we are. Waiting with more love than ever,” Benjamín said, adding: “The only thing in my mind is be with her.”

When Covid-19 pushed France into lockdown, couples across the country had to deal with the challenge of being confined inside together for over two months.

For other couples the challenge was the opposite. As the pandemic ravaged the world, government after government closed their countries’ borders to prevent the virus from spreading further.

The EU's travel rules on 'essential' travel do have an exemption for urgent family travel, but in most places this only counts married couples for reunification. Pedro and Paloma have been together eight years, but Paloma fears their relationship won't be accepted as serious enough for her to obtain a pass through the French border. Photo: Private

Long-distance couples all over the world have campaigned  for weeks under the slogans #LoveIsNotTourism and #LoveIsEssential, calling on governments to make allowances for those who are in serious relationships but are not married.
“We're asking that they open borders for love,” Paloma, 24, told The Local.
Paloma and her boyfriend Pedro, 26, have been together eight years. They are both Brazilian, but Pedro has lived the last three years in France to write his PhD.

Since Pedro moved to France the couple visited each other two or three times a year. They had got used to practicing a long-distance relationship, but they had never been unable to see each other.

Six months of uncertainty, of not knowing when they would next be able to see each other, had been daunting, Paloma said.

“I miss him all the time, every day. My heart can't take it anymore,” Paloma said.

Following in the footsteps of Denmark, Germany, Switzerland and the Netherlands, France decided to make it easier for international unmarried couples to reunite under Covid by letting through those able to show that they are in “loving, durable relationships.”

'Love is not tourism': How Germany wants to bring couples separated by pandemic together

But Paloma worried that the requirements were too strict for her and Pedro to qualify for the exemption. Although they have been in a serious relationship for eight years, they don't have paperwork such as joint bank accounts or tenancies to prove their relationship.

But how could love be measured through financial documents? The idea upset Paloma.

“We live in a globalised world with thousands of binational couples who are a family, but who don't have official papers proving it,” she said. Edouard and Debra met when Debra was on holiday in France. Here they are later together in the Paris Luxembourg gardens. Photo: Private
'I pray we don't lose the relationship'

Debra, 55, an American based in Colorado who had a three-year relationship with “a wonderful man in Marseille” said: “I do worry but I am also hearing they are still trying to perfect the process.”

To prove her love for Edouard, 41, she had “passport stamps, train tickets with our names, emails, texts and photos.”

The past three years Debra has left her home in Colorado to spend a month every year in Marseille. But this year her journey was delayed by Covid.

“I was supposed to go to visit him in July, then changed to August and now I’m hoping to get there in mid September,” she said.

“It has been so stressful. I’ve had to start counselling to help me get through it,” she said.

They had spent the past months making many long video calls and Debra was planning to move to France soon, but she said the long uncertain wait had taken its toll on their relationship.

“We both miss each other and it’s devastating to us both on so many levels. I have a ton of anxiety all the time and worry constantly. I have no peace in my life because of this now.”

“I just pray we will get through it and not lose the relationship because of this.”