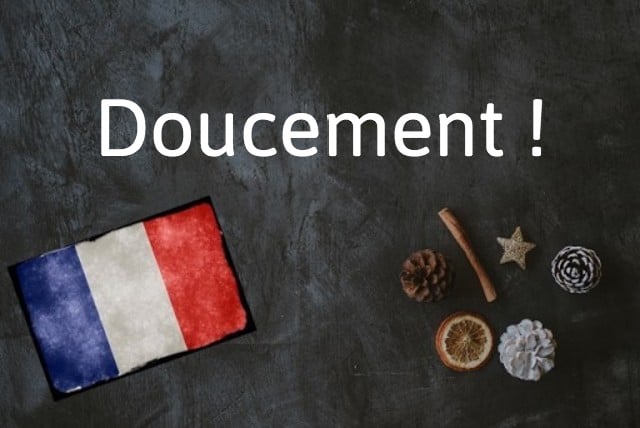 Why do I need to know doucement?

It's a very family-friendly word and one that has a wider meaning than its simple translation.

In its simple form doucement means slowly, so you will see it used for example doucement mais sûrement – slowly but surely.

But the context you are most likely to hear it in is when French parents talk to their kids, and here 'doucement, cheri' is a frequent instruction. In that context it doesn't always mean literally to slow down, but also to calm down, quieten down, play nicely etc.

It's not a telling off, just a gentle reminder to behave and not get over-excited, and one that you are likely to hear a lot because one French cliché that does largely stand up is that parents tend to have less tolerance of their little darlings running around shrieking at the top of their voices and hitting random passers-by.

But if a boisterous child does crash into you while you're walking in the park, feel free to respond with a gentle but firm, doucement, s'il te plâit.

Although its primary use is by parents, you can use it among friends if you want to tell people to calm down or chill out.

Or if you have a friend who is gunning the beers like there's no tomorrow, you could tell them Doucement, meuf – ceci n'est pas une course – Slow down, girl, it's not a race.