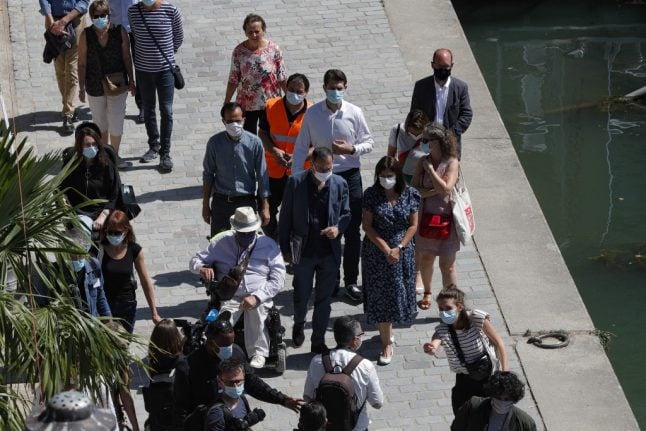 Paris mayor Anne Hidalgo at the Bassin de la Villette, which is now one of the mask zones. Photo: AFP

From Monday, August 10th at 8am it is compulsory to wear a mask in the street in certain parts of Paris and its surrounding suburbs. This is in addition to the nationwide rule that makes masks compulsory in all indoor public spaces.

Paris joins the long list of French towns and cities that have imposed similar rules on mask-wearing in the street.

Which parts of Paris?

This is where is gets complicated.

Announcing the rules, the Paris police préfecture stated that masks should be worn in “certain very crowded zones”. This was then followed by each of the five préfectures concerned – Paris, Seine-Saint-Denis, Hauts-de-Seine, Val-de-Marne and Val d'Oise – releasing their own lists of streets, squares and markets where masks would be compulsory.

The rule is done on a street-by-street basis, so if you are on one of the streets listed then you must wear a mask even if there are no crowds and you have the street to yourself.

Where is gets complicated is there are dozens of streets on the list for each département and, particularly in central Paris, sometimes it's just one part of a particular street that is a mask zone.

While some of the locations are obvious, such as the Seine walkways, the banks of the Canal Saint-Martin and all open-air markets, others are not.

There may be plans underway for signage in the future, but that's not there at present so it seems like Parisians will be spending a lot of time consulting maps over the next few days.

The préfecture of Val d'Oise will apparently be publishing a detailed list later in the week, but from Monday, the masks are only compulsory at open-air markets in the département.

Paris police have also clarified that this applies to everyone on the street, not just pedestrians, so joggers, cyclists and scooter riders will have to mask up too. The existing national rules are still in place too, which means that all indoor public spaces are also mask zones. So that includes public transport, shops, government offices, libraries and leisure centres.

Health minister Olivier Véran also advises that a mask should be worn anywhere where it is not possible to physically distance from other people and French public health ads also suggest wearing a mask while visiting vulnerable people such as elderly relatives.

Are there any exemptions?

In common with the national mask rules, the new Paris rule applies only to people over the age of 11.

What happens if you're caught without a mask?

There is a €135 fine in place for people who are not wearing a mask when they should be.

However police say for the first two weeks they will focus on giving advice and information about the new rules before they start issuing fines.

Which is a good thing, as we think it might take us a while to learn the list of 102 Paris streets, squares and markets where masks are now compulsory. And that's before we even get out to the suburbs . . .