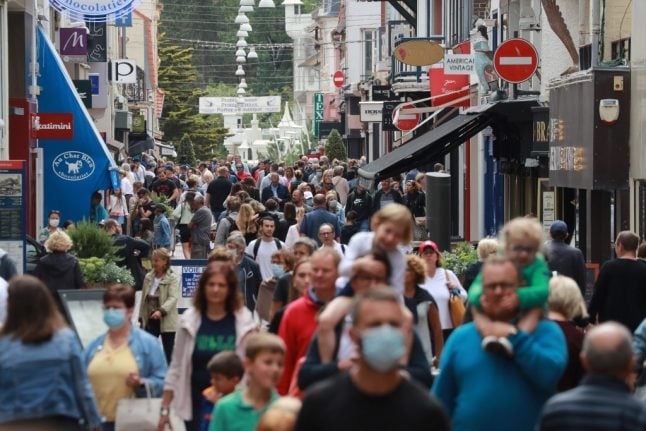 France's coronavirus numbers are on the rise and health authorities have warned that the country easily could lose control of the virus. Photo: AFP

“All indicators show that transmission of SARS-COV-2 infection is progressing and intensifying in week 31,” France’s national health agency Santé Publique France wrote in their weekly Covid-19 update on Thursday.

France first reported a spike in the number new coronavirus cases a couple of weeks ago, when the country saw the daily reports exceed 1,000 for the first time in several months, a tally that kept high in the following days.

The rising numbers has had some people calling for more government action.

“So, how long are they going to watch the curve increase before reacting?” one person wrote in a Tweet that was shared nearly 1,000 times.

But some experts say there is no need to panic yet.

Antoine Flahault, professor of public health and Director of the Institute of Global Health at the University of Geneva, told The Local that, while there was “cause for worry,” the numbers needed to be put in context.

The Geneva Institute closely monitors the development of the pandemic across the world and Flahault compared the situation in France to that of other European countries, saying that at present the situation was “not alarming.”

“The virus has not disappeared during the summer, but France is not in a situation of exponential growth as back in March,” the professor said.

In March, the pandemic spread so quickly that hospitals in hot-spots were struggling to cope and the government sent in military personnel to help the hardest-hit areas.

France imposed one of the strictest nationwide lockdowns in the world, confining the entire population to their homes for two months.

Comparing the current pandemic state in France to that in March was like “taking a temperature with two different kinds of thermometers,” the professor said, as France's enhanced testing capacities made the metrics “much more sensitive now.”

“When you test more, you will get more cases,” Flahault said.

France has massively ramped up the country's testing capacities since this spring, to keep track of the virus and break up transmission chains. While the government's stated goal of 700,000 tests per day was yet to be met, France tested 580,000 people in the first week of August. This represented an increase from around 200,000-230,000 tests a week over the course of June, and up from around 400,000 tests per week in July.

The graphic below shows the number of tests done weekly since the end of lockdown in May. Health authorities have found the increase in new cases to be higher than expected relative to the country's current testing capacity.

At the same time, a majority of the new positives were so-called 'asymptomatic' cases of people who did not present visible signs of the virus. Fifty-one percent of the new cases last week were asymptomatic, down from 55 percent the week before. In total, 65 percent of the total positive confirmed cases in France have been ticked as asymptomatic.

“I’d rather speak about 'mild cases', because 'asymptomatic' is so hard to define,” Flahault, explaining that many of the people who were registered as asymptomatic would likely would experience some kind of symptoms in the days that followed the test.
Most of the asymptomatic cases are young, statistically more resilient people with a lower probability of falling severely ill from the virus, there was little way of knowing whether the current growth in new cases would result in a spike in the number of hospitalisations in the next couple of weeks, according to Flahault.
“It depends a lot of age distribution of the new cases,” he said
“If the new cases is mostly young people and there is no spillover to the elderly or retirement homes, we won’t see a rise to hospital numbers or death rates.”
Extensive testing would be crucial to prevent this kind of scenario, he said.

“The best policy today is to test a lot. That way you trigger the anxiety of the population and individual responsibility, which is the best way to control the disease,” he said.

“The worst-case scenario was what we saw this winter, when ill people went to the doctor who said, 'I can't do anything, we don't have any tests, go back home'.” France has reached a testing capacity of about 580,000 tests per week. Photo: AFP

This seems to be the current official strategy.

The Scientific Council, set up to advise the government on coronavirus-related measures, this week released a warning that France risked losing control over the virus and that, if the numbers kept growing, the country soon could find itself in a situation similar to that of Spain.

“The young population understood that the risk for them was relatively low, but did not understand that they had to protect themselves to protect others,” said Jean-François Delfraissy, Head of the Scientific Council to France Inter the following day.
Delfraissy explained that the Council wanted to ensure transparency because the entire population, not just the government, played a role in ensuring that the virus did not again spiral out of control.
“Our concern is that we will see a significant return of the virus this autumn, when the weather changes,” Delfraissy said.
On Thursday, President Emmanuel Macron urged the French population to remain “at the highest level of vigilance,” and recommended that everyone “get used to wearing masks” also outdoors.

“When you can’t keep safe distances, put on a mask,” the president told BFMTV during a visit in Beirut, Lebanon.

An increasing number of local authorities have already enforced local rules on mask-wearing in some outdoor areas, piling on a nationwide rule of compulsory face-masks inside all public spaces.
MAP Where in France is it compulsory to wear a mask outdoors?
The government has prepared for a scenario where hard-hit areas impose local lockdowns to curb the spread of the virus.
“Localised lockdowns may be a useful tool when the situation seems to go out of control,” Flahault said, adding that: “The government is in a very difficult situation, there is no guidelines on when to choose a lockdown, be it at a local or national level.”
If France kept its testing capacities up to speed with the pandemic, there would not be a need for a new round of lockdown.
“When they pass the threshold of their testing capacities, they will have to introduce lockdown, that’s why they need to keep increasing it towards the autumn,” he said.
“France should not clamp down a new nationwide lockdown now.”