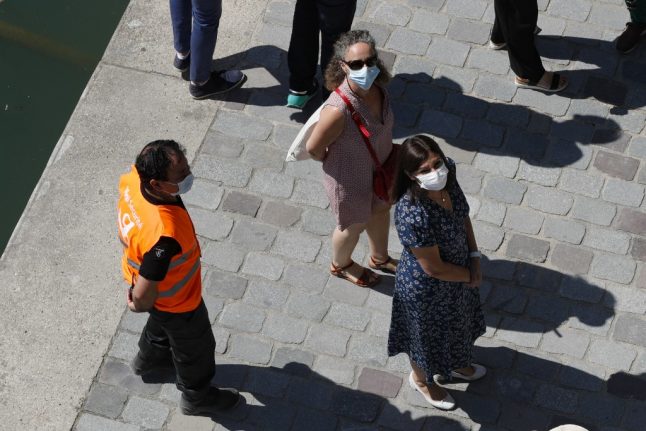 In France it is compulsory to wear a mask in all indoor public spaces, at risk of a €135 fine. However in recent days many local authorities have gone further and made mask-wearing compulsory on the street in towns and départements across France.

Now Paris mayor Anne Hidalgo has announced that she wants to follow suit, and has asked the Paris police préfecture to look at imposing a new rule.

However it is not suggested that this will be a blanket rule for the whole city, but will target areas where large numbers of people gather outdoors. This could include the Seine walkways, the Canal Saint-Martin, outdoor markets or popular parks.

Her deputy Emmanuel Grégoire tweeted: “We are currently working with the Paris police préfecture to define in which areas it may be useful to make it mandatory to wear the mask. The city and the police will make a joint announcement when the measures are decided.”

Anne Souyris, the deputy Paris mayor in charge of health, said: “The aim is to slow down the resumption of the Covid-19 epidemic.

“The movement has been slow but steady for the past month. A second wave is expected. There is an urgent need to reinforce barrier gestures if we do not want to reach a new lockdown.”

The final list of 'mask zones' is still being drawn up, added Souyris, saying: “We are going to rely on the feedback from the district mayors to define the zones as precisely as possible.

“Wearing a mask is difficult, especially when it's hot. If the zones are chosen intelligently, Parisians will wear it.”

Paris police chief Didier Lallement is working on the list of areas, but has also indicated that the petite couronne – the départements of Seine-Saint-Denis, Hauts-de-Seine and vale-de-Marne which surround Paris – could also be included in the new measures.

Paris was particularly badly hit during the height of the epidemic in the spring, with both the city and its surrounding suburbs reporting some of the highest death rates in the country.

Health experts have pointed to Paris as a possible candidate for a local lockdown if cases rise, as large numbers of people live in densely populated areas.