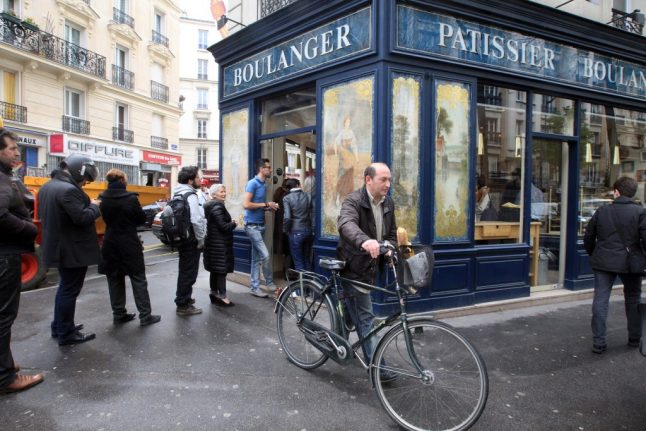 It's a real pain when you have to queue for the 'pain'. Photo: AFP

The technical term for these (pardon our French) cunning little b*stards is false cognates although you will frequently hear people talk about faux amis (false friends) too.

Here are 20 that you will encounter on a daily basis in France, all with the capacity to throw you off balance a little, either while reading or speaking.

Chair – this doesn’t refer to the piece of furniture you sit on – that’s chaise – the French use it to say ‘flesh’. One good example is chair de poule, meaning gooseflesh or goosebumps – J’en ai encore la chair de poule (I still have goosebumps).

Queue – when you’re waiting in line in English you’re in a queue, but in French it’s a file.

The French do use faire la queue for “to queue” but on its own queue can also mean either “a tail” or a slang term for “penis”. So be careful you have the right one when you’re explaining how long the line is.

Blouse – Quick history anecdote. If ‘blouse’ sounds French to you that’s because it is. Its use is first recorded in English around the 1820s, referring to a loose, light upper body clothing garment.  But whereas in modern English it came to usually mean a woman’s shirt (a chemisier in French) in France its usage is mainly to speak of overalls worn by workers, lab coats by scientists or surgical gowns by doctors.

In fact les blouses blanches (the white coats) is often used as a synonym for medics as in this headline – Crise à l’hôpital: Les blouses blanches dans la rue ce vendredi pour un nouveau round –  Hospital crisis: Medics on the street again on Friday for another round.

Main – in English it’s used as an adjective to mean the ‘most important’. In French, it’s the word for ‘hand’. In the case of the cortical homunculus, the distorted representation of the human body based on neurological sensibility (below), his mains are his main attribute.

Pain – It’s not a synonym for ‘agony’ as it is English, it means ‘bread’ as you probably know. It does mean that you can make the philosophical pun below, though.

Emu – This has nothing to do with the bird but actually means “emotional” or “moving”. Je suis trés emu – I’m really moved

Four – In French four does not refer to the number between three and five (that’s quatre). Un four is the kitchen appliance used to bake your pain – the oven. J’ai fait cuire le pain dans mon nouveau four – I cooked the bread in my new oven.

Pile – Pile means a ‘mound’ or ‘haemorrhoid’ in English but in French it actually refers to a ‘battery’.  An example: Puis-je avoir deux piles? – Can I have two batteries?

Chat – the difference between a ‘chat’ with friends and a ‘feline’ lies in the silent ‘t’ and a more “shh” sounding ‘ch’ in French.

Mince – In English it’s the verb ‘to chop up meat’, the noun for chopped up meat, there’s the saying ‘ don’t mince your words’ meaning to speak in a forceful way and mince can even be the verb for a ‘stylised manner of walking’. The French keep it simple, using it just as an adjective for slim or slender, although you will also hear it as a family-friendly version of merde (shit).

Sensible – This is a potentially awkward one. How many times has a French person called you ‘sensible’ and you were secretly chuffed, when really they meant that you were ‘sensitive’? Pourquoi es-tu toujours trop sensible? – Why are you always so sensitive?

Baskets – In French this is a shortened version of ‘basketball’ used to refer to ‘trainers’ or ‘sneakers’, presumably because the sport’s popularity in France came to be associated with the comfortable footwear that players wore. Nothing to do with the basket you put your laundry or your shopping in, that’s a panier.

Coin – Nope, it’s got nothing to do with the loose change in your pocket, but rather refers to a ‘corner’ in French. J’habite au coin de la grande rue – I live on the corner of the big street.

Court – It doesn’t have anything to do with a tennis or basketball court in French, it just means ‘short’.

Spectacles – When a French person shouts Quel spectacle! they’re not complimenting your old-fashioned glasses, they’re referring to the incredible ‘show’ or ‘theatre production’ they’ve just watched. The spectacles you wear are called lunettes.

Natter – It’s not a synonym for chat, in French it’s the verb ‘to braid’ as in to plait hair.

Librairies – Here’s an easy one to muddle up. Whereas in English ‘libraries’ are book repositories where you rent out printed work for free, in French it’s the plural for ‘bookshop’. So remember: library card at the bibliothèque and debit card at the librairie.

Rude – The French may have a (perhaps undeserved) reputation for being a bit rude sometimes, but this isn’t the word you’re going to want to use with the next Paris waiter that grunts at you. In French, rude means ‘harsh’ or ‘tough’. La vie est rude pour un étranger à Paris – life is tough for a foreigner in Paris. To refer to someone who’s impolite say impoli or grossier.

Tissu – In French this noun doesn’t just refer to the ’tissue’ you need to blow your nose with, this means all kinds of materials or fabric. So un magasin de tissus is what you would need if you were a dressmaker. If you need tissues for your head cold, try the pharmacy or the supermarket.

Report – An important one to know about for professional matters. In French, report never refers to a study or investigation. It can actually mean a ‘postponement’. Le juge a accepté un report de la date du procès – the judge accepted the postponement of the trial date. It can also mean the ‘minutes’ of a meeting .

Ben – A confusing word for English speakers in France who are called Ben. In French it’s used as a spoken intermission to express hesitation or surprise, meaning everything from ‘errr’ to ‘well’ to ‘hmmmm’ and ‘of course’.

It’s pronounced more like ‘bah’ and is very commonly strewn around French sentences. Here are a couple of examples

“I really want to piss off the unvaccinated,” French President Emmanuel Macron, drawing widespread condemnation for his choice of language.

In an interview with Le Parisien, he said that la bêtise (“stupidity”) was the “worst enemy of democracy”.

It is not the first time that the leader has used fruity language since being elected.

He has variously described the French as fainéants (lazy), les gens qui ne sont rien (people who are nothing), and Gaulois réfractaires (Gauls who are resistant to change). During a visit to a factory, he once said that protestors outside of a factory should go to work rather than foutre le bordel (“fuck things up” – or literally, “fuck up the brothel”).

Serving as the Economy Minister under the presidency of François Hollande, he said “there were lots of illiterate people” during a visit to an abattoir.

“In a certain way, we are like prostitutes: this job is about seducing,” told the Wall Street Journal in 2015, describing his former job as a banker.

Other French leaders have dished out their fair share of provocative statements – some more discretely than others.

Macron’s predecessor, François Hollande, allegedly referred to the protesters and poor people as sans dents (toothless people). The revelation came after his 2017 election defeat and was disclosed by his ex-partner, Valérie Trierweiler – although we should probably point that she wasn’t exactly his biggest fan after he was caught having an affair with an actress while they were together.

Nicolas Sarkozy, who served as president from 2007-12 is perhaps the most prolific French head of state when it comes to outrageous language.

During a visit to the 2008 Salon de l’Agriculture, he was shaking hands with people in the crowd.

Sarkozy described Hollande as an amateur, mal fagoté (shabbily dressed) and un président ridicule (a ridiculous president). He said of his own party that they were tous des cons (all idiots). He described Marine Le Pen as une hommasse (mannish/butch), Xavier Bertrand as un médiocre and François Fillon (who served as Prime Minister during Sarkozy’s presidency) as un loser.

As Interior Minister, Sarkozy described the residents of Argenteuil as racaille (scum) after a visit to the Parisian suburb saw his convoy ambushed by people throwing objects from tower block.

Jacques Chirac is best known internationally for his opposition to the American-led invasion of Iraq in 2003.

While he may have been reluctant to launch military attacks, verbal assaults were his strong point.

Before becoming President, he served as Prime Minister where he met with Margaret Thatcher at a European summit. After a disagreement, he told reporters: Mais qu’est-ce qu’elle veut en plus cette ménagère? Mes couilles sur un plateau? (What does this housewife want? My balls on a plate?)

As the founding father of the fifth republic, it would be wrong not to include Charles de Gaulle on this prestigious list.

In 1968 the president used the word chienlit to describe the social disorder around the 1968 student uprisings. It translates as “shitting in your own bed”.

Huh?
Er, De Gaulle opened a cabinet meeting by calling the May '68 student uprising "la chienlit" (shitting in your own bed) and his prime minister in 1966, Pompidou, pioneered the presidential use of "emmerder" (piss off).

My hunch is Macron will get a small poll bump from this https://t.co/Um50x61KWa

Macron is something of a fan of De Gaulle, even including one of the General’s books in the background of his official portrait, so perhaps he is also emulating his language?

Georges Clemenceau was the Prime Minister of France during the latter part of WWI. He was known to have a difficult relationship with his British counterpart, David Llyod George. He once said je pouvais pisser comme il parle (I could piss when he speaks).

Clemenceau described one of his political rivals, the pacifist Jean Jaurès, as a “dangerous imbecile”.

Napoleon Bonaparte was betrayed by one of his ministers, Charles-Maurice de Talleyrand-Périgord, who sold state secrets to France’s enemies.

After finding out, Napoleon reportedly said Vous êtes de la merde dans un bas de soie! (You are shit at the bottom of a silk stocking).

Coincidentally, Talleyrand is the man credited with popularising escargots in France.